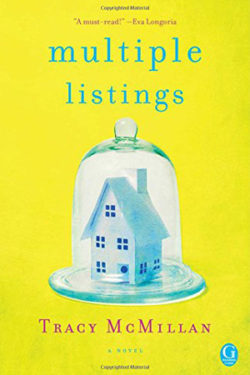 This is Tracy McMillan’s debut novel, and I look forward to reading more by her. There are a lot of twists and turns in MULTIPLE LISTINGS but not the depth of characters that I would have liked. The story is a little choppy since the chapters are told from either Nicki’s point of view or her dad’s, Ronnie. Ronnie has been in jail for most of her life, and now that he’s been released, he’s trying to make up for lost time with Nicki and her son, as well as in his own life.

Nicki is a successful businesswoman and single mom raising her teenage son. She makes poor choices in the relationship and love arena, but that could be because of her disastrous upbringing by her mother, who didn’t want to be a mom, and her dad, who was in and out of jail.

Nicki seems to be doing surprisingly well raising her own son, until her dad enters their lives and she sees what’s been missing in her son’s life. When we’re introduced to Jake, her younger boyfriend by eleven years, I couldn’t wrap my head around it, especially since Jake is so young. Nicki and her best friend, Peaches, seem to be at odds more often than not. And Nicki is always trying to please someone, so she makes poor financial and business decisions before she gets back on track. Ronnie is often likable, especially when he’s acting like a father figure to his grandson, making the right decisions and not being a womanizer or going back to his old life.

There is a lot of angst in this family drama with themes of love and forgiveness. There is some closure but the ending was too abrupt for me. I didn’t realize I was at the end of the story until I turned the last page and there seemed to be more story to tell.  Also, there were loose ends regarding Ronnie’s favor that he was granted and Nicki’s relationship with Jake. A bit more story would have given some much needed closure.