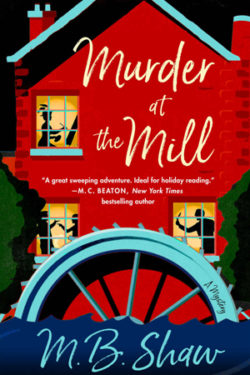 M.B Shaw’s magnificent murder mystery, MURDER AT THE MILL, first book in series, contains more snakes than in a hen house. It stars a fashionable, alluring portrait artist named Iris Grey. Iris’s marriage is disintegrating and is depressed. So, she decides to distance herself and lease a cottage at Mill House. The cottage is part of famous crime writer, Dom Wetherby’s estate. Iris is also commissioned by his wife, Ariadne, to paint his portrait. Though the family puts on a perfect front, tension lurks beneath the false facade, revealing what exactly? Iris is intrigued and her painting of Dom shows the many facets to his personality and more. Unwittingly, she paints an important piece to solving the mystery in her painting, as she later discovers.

Iris is invited to the Christmas festivities at the Wetherby’s estate which is attended by family, friends, relatives, media and business associates. Many shocking surprises occur at the bash. Then, on Christmas day, Dom is found dead and it is ruled a suicide by the police. But is it really suicide? Iris is skeptical after the huge fracas at the party last night.

The daughter-in-law, Jenna, isn’t buying it either, and the two women dig up dirt and more, as they discover dirty laundry going back decades. Dom had many enemies. But, who hated him enough to kill him? Will Iris find true happiness once again?

MURDER AT THE MILL is a splendid murder mystery filled with several suspicious suspects. A brilliant, deeply plotted mystery with a feisty gem of a sleuth, Iris Grey, is set in an English village evoking Edwardian images. The story patters along, entangling the reader in its multifaceted plot, with slippery characters, electrically charged emotions, sinister secrets, and shocking discoveries. The author conjures a frothy, foggy atmosphere with its British setting, which adds to the overall mystifying tale. I was totally captivated and couldn’t put down Ms. Shaw’s fine novel. I loved everything, including the shocking murder suspect at the end. I didn’t see it coming at all! MURDER AT THE MILL is a deceptively stealthy murder mystery that sneaks up on you like a slithering snake. Bam, and you’re hooked!