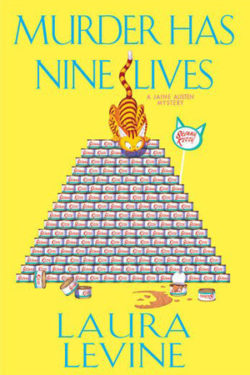 Freelance writer Jaine Austen’s newest assignment of writing a brochure for Toiletmasters and their new Touch-Me-Not toilet has a plus side, a date with the nephew of the company’s president. Plus, she has an upcoming tropical vacation in Maui with her parents to look forward to. But she can always use a bit more money for the trip, and when her cat Prozac is unexpectedly featured in a Skinny Kitty diet cat food commercial, she begins to see her dreams fulfilled. Surprisingly enough, her fear over Prozac’s usual attitude is proven unfounded when he seems to behave, napping and eating right on cue, and she starts to see a life of stardom for her cat and mucho money for herself.

With dollar signs dancing in her head, everything seems to be going extremely well. But not everything is heavenly as when Jaine’s next door neighbor does all he can to sabotage her and launch his own pet into stardom. Next the unthinkable happens as the Skinny Kitty inventor drops dead on the set and everyone, including Jaine, is a suspect. Advised not to leave town, Jaine has only a matter of days to solve the case or lose a trip of a lifetime. There are many who have motive enough to want the man dead, but will Jaine be able to find the real killer in time for her vacation without making herself his next target?

A cozy romp, MURDER HAS NINE LIVES, the latest book in author Laura Levine’s JAINE AUSTEN MYSTERY series, is a clever, hilarious contemporary mystery that will make you laugh out loud. The crazy antics of Prozac and Jaine push anticipation as the mystery keeps you guessing. As if the story is not hilarious enough, the emails between Jaine and her zany parents who are about to enter a Scrabble contest adds even more humor. Fighting against the clock, Jaine has a whole cavalcade of suspects to filter through while trying to keep herself from becoming a victim as the surprises keep coming.

Although this story is the fourteenth in the series, this tale seems just as fresh as the first one. Although it can easily be read as a standalone, Ms. Levine’s books starring Jaine and her outrageous cat Prozac become addictive. If you fancy cozy mysteries or are a cat lover, this is a book you don’t want to miss.