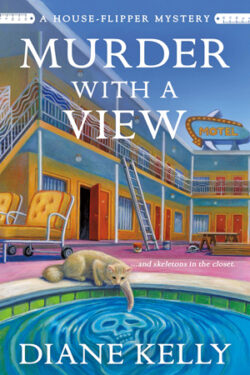 Murder, suspense and a little romance sizzles in Diane Kelly’s new book, MURDER WITH A VIEW, in the House-Flipper mystery series. Whitney Whitaker, an enterprising carpenter, along with her cousin, Buck, purchase a decrepit hotel across from the Cumberland river in downtown Nashville. They take on a surprising new silent partner to help fund their up and promising new condominiums. The Whitakers are transforming twelve hotel rooms into six lavish condos. Will they succeed?

On the first day of work, Whitney gets a big surprise when she finds a guy living in one of the rooms. Whitney and Buck decide that the vagrant, Jimmy, is satisfactory and hire him to help with the restoration. Although, the next day, while cleaning out more rooms, Whitney’s cat, Sawdust, finds a dead body lying in a bed. Oh no, it’s country-western singing sensation, Beckett Morgan! Why would someone kill Beckett?

Collin Flynn, a handsome homicide detective and Whitney’s boyfriend, discovers that Beckett did plenty of women wrong by stringing them along. Plus, his band mates, manager, and a slew of others have plenty to say about Beckett. Little Sawdust, Whitney’s clever cat, is a charming addition with his catchy cat opinions! Will he help her out with clues too? With the endless list of suspects, will Collin, with help from Whitney, narrow down the list to a chosen few who might have done the dirty deed?

MURDER WITH A VIEW is pure knee-slapping, dirty-slaying fun with handy, dandy, Whitney and her cousin, Buck, who buy a rundown hotel and transform it into a showstopping condo building. Only they are halted in their tracks when a dead body is discovered. Delicious detective, Collin Flynn, uncovers a slew of suspects who had a beef with the deceased, country singer, Beckett Morgan. But, who was the person that bumped him off? The author does a fine job sussing out crazy characters, frenetic fans, and more in this finely tuned plot. This was by far the hardest story yet to figure out who was the wacko who did it. Absolutely loved the romantic subplot between Buck and Whitney’s friend, Collette. Ms. Kelly definitely knows the winning recipe of cozy mysteries. I absolutely love her stories! MURDER WITH A VIEW is a perplexing page-turner!