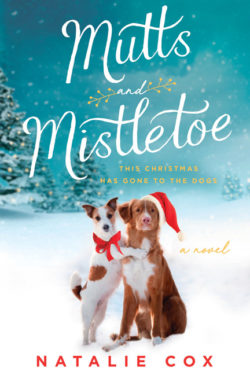 MUTTS AND MISTLETOE was a quick read, but it took me awhile to connect with the characters. It was far easier for me to get to know the dogs, of which there were many, in the story. At times, the telling of the story was like slapstick with all the clumsy things that Charlie does.

Jez is the owner of Cozy Canine Cottages and wants to get away to be with her love interest while her cousin, Charlie, needs a place to stay. Charlie received injuries after an explosion occurred outside her apartment in London, destroying her apartment.

Charlie is not a Christmas person, and she’s not a dog person either but feels she needs to do her cousin a favor for taking her in. Thus Charlie is immersed in all things Christmas and has a pregnant dog in addition to several other canines to care for. The quirky townspeople also add to the story.

There is a mystery to be solved, a romantic relationship which develops, humor, and friendships that grow. The dogs seem to understand whatever’s going on and whatever Charlie is up to and are usually united in their actions. It’s hard not to want to cuddle with them. The characters are mostly what-you-see-is-what-you-get. But the interactions between Charlie and Cal—the vet, whom she calls on more than once for help and advice—are hard to decipher. Is there an attraction or isn’t there?

There was some closure with the epilogue, but it didn’t go far enough for me. There might be a happily ever after, but too much is left to chance. I will give another of Ms. Cox’s books a try to see if there is the closure that I’m looking for.