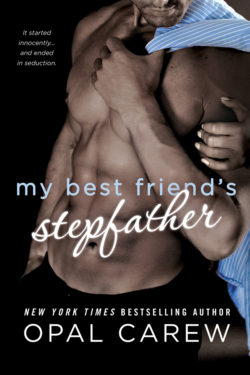 Opal Carew’s writing is intensely sexy and sometimes even shockingly unexpected.Her book, MY BEST FRIEND’S STEPFATHER, is no exception. I’ve read many of Ms. Carew’s books in the past so had an idea of how intense it could get. But I hadn’t anticipated the many twists and turns in the plot. The relationships between the various characters were well thought out and at times heartbreaking, but there was an air of honesty between Ashley, Damien, and Adam that speaks well for a future between them. Helen’s scheming, manipulation, and drinking problem are problematic yet easy to see through. Instead of feeling disgust for her, I actually felt sad because it’s so obvious she needs help. The sex scenes are hot but not nearly as graphic as they could be. So if you’re looking to dip your foot into the erotic romance genre, then MY BEST FRIEND’S STEPFATHER is a good place to start. Just enough heat to make you break a sweat but not enough to overwhelm your senses.