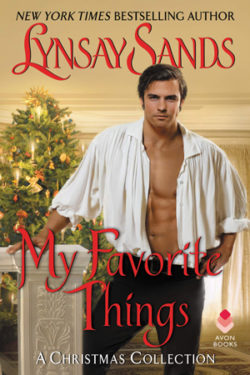 MY FAVORITE THINGS: A CHRISTMAS COLLECTION by Lynsay Sands has three different Christmas stories in the book—ALL I WANT, THREE FRENCH HENS, and THE FAIRY GODMOTHER. The first two are regency romances, and the last one is set in 1324 and has a bit of magic in it. All three stories are set in England at Christmas and have both strong male and female characters. They also had me laughing.

Pru is mortified by her father’s behavior ever since the accidental and untimely death of her brother, the only heir. Her father is always drunk and gambling, and she fears he’ll put them in the poor house. Pru tries to figure out when to confront him. Lord Stockton owns Ballard’s, a gentleman’s club, where her father is known to spend his time. Little does she know what will happen when she and Lord Stockton start to butt heads. This is a nice story, and the prologue sets the stage.

What happens when a lady doesn’t want to marry the man her father wishes her to? The lady switches rolls with a lookalike maid! Anything can happen and it does. Brinna, the servant, thinks she’s only playing the role of the lady while Joan, the lady, wraps her arms around her newfound freedom to follow her own path. Little does Brinna know the trouble she herself is getting into. Brinna and Thurleah, Joan’s intended beau, hit it off, but of course he has no idea Brinna isn’t a lady. There are multiple stories going on at once that seamlessly tie together by the end. There are some steamy moments too. I like the way the ending plays out and how secrets long buried get uncovered. There end up being two happily ever afters, or so it seems!

There is quite a bit of magic in this story thanks to a dead woman who is trying to become an angel. There are so many plots in the story that’s it’s hard to know what’s real and what’s not. Odel has just lost her father, and it’s in her home where the story takes place.  She’s not in mourning since life with her father was oppressive and dark. Her dad was not a nice person at all.  When the new Lord Suthtun, Michel, and his very sick charge stop at her home, in need to spend the night, they are given a room. Their arrival begins numerous adventures. The story is filled with ups and downs, laughter and tears, and holiday activities. Odel and Michel are drawn together, but neither has any interest in marriage or the opposite sex, given what they saw growing up. The story ends on a wonderful note and was a superbly engaging read.

MY FAVORITE THINGS is a wonderful collection of historical Christmas stories.

Ms. Sands is a new-to-me author. I plan to give more of her historical romance books a try.