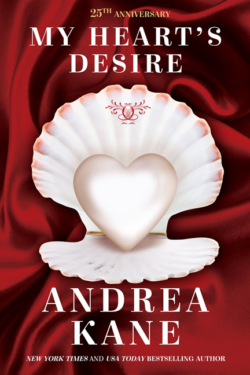 The 25th Anniversary Edition of Andrea Kane’s MY HEART’S DESIRE is as entertaining today as it was when she first released it. With typical Kane wit, charm, and romance, MY HEART’S DESIRE takes feisty Lady Alexandria Cassel, a woman who despises the entitled wealthy of London’s high society, and pits her against Captain Drake Barrett, a man who’s much more than he seems.

What makes an Andrea Kane novel so appealing is her treatment of the female protagonist as a well-rounded person with strengths as well as vulnerabilities. Despite being creations of their time, these females fight for what’s right and are always fully fleshed characters.

The story begins with Lady Alexandria stowing away on Drake’s vessel. They strike sparks off each other, and the attraction morphs into a deepening affection. Especially when they’re caught in the war between America and England in the War of 1812, and they’re forced to trust each other. Danger, both to them physically and emotionally as their affection grows, creates a palpable tension that enriches the story.

Alexandria dislikes the wealthy, so when she finds out about Drake’s hidden riches, she’s not pleased to say the least. Yet she’s already fallen in love, so what’s she to do? Then there’s a threat surrounding them upon returning home, and from sources much closer than they suspect.

Elements of danger, provocation, and sweet, sexual longing intertwine to create a riveting tale between two stubborn souls made for each other. The blossoming romance is captivating, and the suspense engaging, page after page.

MY HEART’S DESIRE is a must-read for fans of Andrea Kane, and for historical lovers as well. This is classic historical romance at its best.