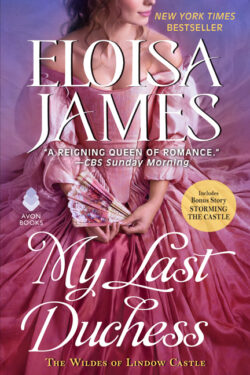 MY LAST DUCHESS by Eloisa James is a sweet romance. Hugo, the Duke of Lindow, has a problem. He has divorced his second wife, who ran off with her Prussian lover and left him alone. Although, he has eight children by his first two wives, so he is not entirely alone. When his first wife died, Hugo impulsively married Yvette, who gave him four more children but was not much of a mother figure.

Widowed Ophelia, Lady Astley, is perfectly happy living a quiet life and raising her daughter. She comes out of seclusion to attend a ball with her cousin. Hugo attends the ball at the urging of his sister and becomes focused on Ophelia. Thus begins his pursuit of her. He is the charmer and oh so romantic. Ophelia finds it hard to resist the romance and kisses.

MY LAST DUCHESS is a romance between two people who come from very different backgrounds. Hugo just wants to take care of his children, but he wouldn’t mind falling in love again, as he did with his first wife. Ophelia was fond of her husband, but it was not a very romantic marriage, so she isn’t sure that her feelings for Hugo are realistic.

MY LAST DUCHESS is part of the series The Wildes of Lindow Castle, but it certainly can be read alone. There is no black moment as this is a prequel to the series, and so the readers know there is a HEA.

There is a bonus short story at the end, STORMING THE CASTLE.