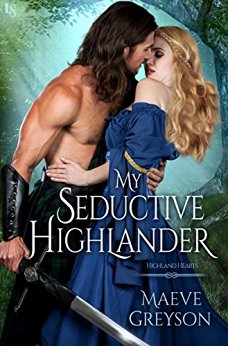 Graham MacTavish was cursed by an evil witch – a curse which trapped him in the form of a dragon by day and a man by night. Lasting for over three centuries, the curse also locked him to the shores of Loch Ness and the depths of the sea. Since the Sinclair women freed him from the curse he has been living life to the fullest with a great deal of womanizing. But his latest rendezvous involved an allied chieftain’s wife and his mistress, although Graham did not know their identities at the time. This action has endangered Clan MacKenna, the clan who adopted him after the curse. So the MacKenna chieftain has sentenced Graham to marriage, in the twenty-first century, to the chieftain’s sister-in-law, who is one of the Sinclair women. There is nothing on earth that scares Graham more than the Sinclair women. They are able to skate back and forth through time at will and control unexplainable powers, each one blessed with a different gift. Now Graham is being sent to the twenty-first century to woo Lilia Sinclair and save her from herself. He hardened himself to love while he was cursed, but now it will take love to protect Lilia. He has been given one full month to win her heart and convince her to be his wife. If he fails, he will be returned to the past and to the Buchanan’s chieftain, who wants him drawn and quartered.

Empath Lilia Sinclair believes that allowing anyone to help her is a sign of weakness. Strong and stubborn, her isolation and insecurities nearly caused her to end her life a year ago. As an empath she can’t always shield herself from the cruelties around her. Able to see the future, usually dire events, she can’t always save those she sees in her visions and she feels the pain and suffering of the world more than most. The guardian who was sent to watch over her is dying and Lilia must not be left alone where the darkness of despair can overpower her. To protect herself she puts up an emotional wall that will let no man in.

Arriving in the twenty-first century, Graham is astonished at some of the sights he sees, but the most beautiful sight to him is Lilia. He regrets endangering the MacKennas and sets out to win Lilia, who is as fierce as any Highland warrior. Needing to adhere to the one month time limit, will Graham be able to win the heart of this woman who has stolen his, or will he return brokenhearted to the past, only to be turned over to the Buchanan clan for certain death?

A titillating tale, MY SEDUCTIVE HIGHLANDER, is the fourth book in author Maeve Greyson’s HIGHLAND HEARTS series, a witty, sexy time travel romance that is sure to enthrall readers. Lilia, the last of the Sinclair sisters still residing in the twentieth century, wants nothing to do with traveling to the thirteenth century, nor does she wish to marry or relocate to that time. Not even her granny’s manipulations can convince her to leave the twenty-first century. Meanwhile, Graham is hilarious as he adjusts to the future. At first, he can’t imagine being tied to one woman for the rest of his life, but he soon changes his mind once he meets Lilia. There is definite chemistry between these two and I enjoyed their interaction from the beginning to the end in this creative tale.

Alternating between thirteenth century Scotland and the present day, MY SEDUCTIVE HIGHLANDER is filled with imagination, magic, mystery, time travel, humor, romance, a Scottish setting, battles, love and loads of action. What more could you want? This is an enchanting story and though it can be read as a standalone, I advise starting with the first novel in this series, MY HIGHLAND LOVER, followed by MY HIGHLAND BRIDE and then MY TEMPTING HIGHLANDER before reading MY SEDUCTIVE HIGHLANDER to get the full picture of the Sinclair women, their gifts and the men they love. The closeness between the Sinclair females is also heartwarming and sure to touch your heart. This novel winds up the HIGHLAND HEARTS series beautifully and is a must read for fans of time travel, Scotland, paranormal, romance or just plain fun narratives!