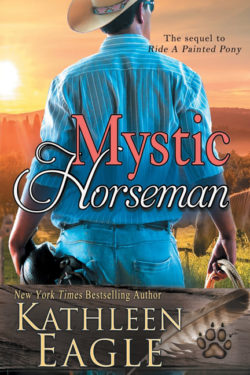 MYSTIC HORSEMAN by Kathleen Eagle is a contemporary western romance featuring Lakota Sioux Dillon Black, best friend of Nicholas Red Shield from book one, RIDE A PAINTED PONY. Dillon’s love for his daughter and wild horses give him an idea for a horse camp for wayward youth. When their grant is denied, will their dream also die?

Kathleen Eagle has a knack for writing the types of stories I love to read. Her male characters are realistic in their mannerisms. We’re often gifted with their point of view. That can also lead to a shortened and choppy writing style that is difficult to read, at first. It usually takes me half the book to get into the rhythm, then I must re-read sections to understand what they mean. It’s creative and consistent, so I’m sure it’s just the author’s style, but it made me stumble reading this book.

The Native American mysticism makes Dillon’s character realistic, but his thought process comes across as disjointed if you don’t follow his realm of thinking. The less descriptive sentence structure often flows into the woman’s point of view, which doesn’t seem as realistic as it is for a man’s. I get that it’s a style issue that simply doesn’t work with my brain as consistently as other techniques, but I’m honest about how a book makes me feel.

Maybe that’s why I found it more difficult to get into this second book as quickly as the first. There wasn’t a lot of action at the beginning and mostly inner dialogue instead of interaction by the characters. These long internal monologues update you on where the characters are in their heads right now, and then tease you a bit to warn of what’s coming. As a reader, I feel I need to pay close attention to this style because there are hints I must retain. That forces me to re-read several paragraphs because my mind wanders. I think that’s why I like character interaction and dialogue so much, because I don’t have to think as hard as I do with descriptive inner monologues.

With that said – this choppy and ethereal writing style is beautiful. There are inner meanings to discern as you go, so it keeps me thinking. It’s like the idea is put out there in a shortened form where the reader needs to decide what does this mean, exactly? For some, I’m sure they’ll just rush through it and not give it a second thought. But for me, I’m always wondering why it was written that way, as well as what is the underlying meaning.

This group of characters is faced with some sad circumstances. There are the trials of reservation living with the promise of a camp that may help the youth. Then Dillon’s ex-wife gets involved for unselfish reasons that look completely self-centered. Her story is heartrending.

Also included are Dillon and Monica’s two kids – a daughter in college who adores her father, and a younger son who couldn’t care less. He doesn’t know his father, so of course he’d rather that life just be the same as it has always been. Then Monica’s good friend Ella is roped in for her expertise on the project that continues to grow. A reality show is coming to Dillon’s ranch, but will he be ready for the reality when the truth is revealed?

Kathleen Eagle’s books are very hard for me to rate in numbers. There are so many good points, including a plot that’s unusual and interesting. Then there are the style issues that don’t always work for me. The fact that I keep coming back to read them should say it all. Just because an author’s style isn’t necessarily one that I can easily read without a few speed bumps, doesn’t mean I don’t enjoy her books. Exactly the opposite; it makes me strive as a reader to appreciate the magic within.

If you want to try a unique author with a lot to say, read my review of the first book, RIDE A PAINTED PONY. Then grab a copy of both books and enjoy the ride.