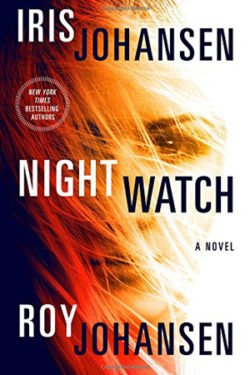 In the fourth installment to the Kendra Michael’s series, NIGHT WATCH by Iris Johansen and Roy Johansen, Kendra and a blast from her past make her put all her skills and knowledge to the test. Being born blind, only to later gain her sight thanks to the Night Watch program and Dr. Charles Waldridge, has left Kendra with finely honed skills that aid her not only in helping patients, but also the police and FBI. This time Kendra will put all her skills to use in locating the man who helped her gain her sight. She will also pull in any favors that she needs too, including pulling in Adam Lynch.

Adam Lynch is dangerous and sexy in equal measures. His fortress makes her feel as if she has ensconced herself into a haven away from the dangers of the world, and Adam makes her feel the same way. However, she doesn’t need his sexy right now, she needs his dangerous side as well as the contacts that he gained during his career around the world. Plans change when Kendra is almost kidnapped. Now retribution will be paid, and Adam will end up having more reason for find Dr. Waldridge than just helping Kendra. It is time to make the hunter become the hunted, and that is one of Adam’s specialties.

As the first book in this series that I have read, I am now addicted! Even though this is the fourth book in this series, I don’t think it is necessary to read each story to understand the characters or how they interact. Iris and Roy Johansen made Kendra’s past, and her relationship with Dr. Waldridge, integral parts of this story. Kendra is a very determined character with a very interesting way of looking at things in a way that others miss. I admit that it took me a bit to get involved with this story. But when it finally clicked, I was hooked.

I don’t consider this a romantic suspense, as there wasn’t as much romance as I would have liked, but that in no way detracted from the storyline. There is a ton of suspense and intrigue that pepper the pages with different twists and turns that I was not expecting. I liked how Kenda and Adam balanced each other, while at the same time readers can see where their relationship is heading (hopefully). I also enjoyed that the storyline was from Kendra’s POV and not numerous different characters.