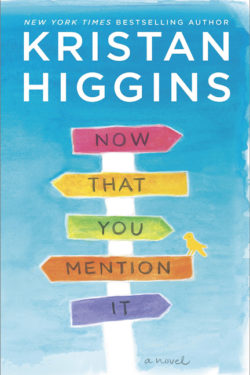 NOW THAT YOU MENTION IT is another great read by Kristan Higgins. My emotions were engaged from the first page to the last.There were laugh out loud moments as well as sniffles and tears.

For Nora, growing up on the small island of Scupper Island, Maine, was brutal. She was overweight; her dad left when she was young, never to be heard from again; she and her sister became estranged; her mom wasn’t always there for her; she was bullied in school, had no friends, and was called “Troll” by the cool kids in high school. Nora couldn’t wait to leave the island and pinned her hopes on winning the Perez Scholarship, which would be life-changing for her.

Nora never looked back after leaving the island and settled in Boston after going to college and then becoming a doctor. She never once returned and instead had her mom visit her in Boston. When Nora’s life spiraled out of control and she had to return to the island to heal emotionally and physically, it felt like she was fifteen again.

Watching Nora deal with everything life threw at her–both bad and good–was both heart-wrenching and heartwarming. Her doctor boyfriend was by no means a prize, hitting on other women constantly. Her friends stood by her through good times and bad…mostly. Reconnecting with the islanders was tough, and it seemed as if her mom preferred her bird, Tweety, to her own daughter. Seeing Luke, someone who never grew up and kept blaming her for the way his life turned out, was ugly at times. His twin, Sullivan (Sully), seemed to be there for her, but was that only because his teenage daughter befriended her?

Watching Nora’s relationship grow with her mom, her niece and also with some of the islanders was satisfying. Trying to repair her relationship with her sister, Lily, proved a real challenge.

The story was filled with family, old hurts, love and laughter. Nora’s dog, Boomer, was always there for her and proved it over and over again. The descriptions of the island and people within made me feel like I was there. There were twists and turns throughout the story, and several plot lines going on that were seamlessly woven together. There was a depth to the characters that revealed their strengths and flaws a little at a time. There was some closure and a happily ever after or two along with some loose ends as well. I’d loved to revisit Nora and the others in a novella set at the holidays (hint, hint).