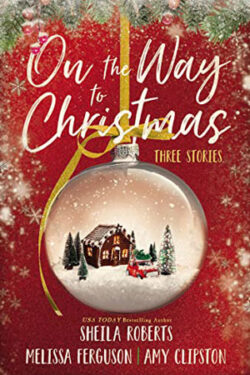 ON THE WAY TO CHRISTMAS: THREE STORIES is an anthology set between Thanksgiving and Christmas and is a fun read with a lot of Christmas spirit. I’ve read books by Ms. Roberts and Ms. Ferguson before, but Ms. Clipston is new to me. I look forward to reading more books by each of them. And what a cute cover!

A Christmas Do-Over by Sheila Roberts

Darby was a mean girl growing up, and it doesn’t sound like she’s changed all that much in the ensuing years. When she returns home to the small town she grew up in, most aren’t happy to see her—not even her younger sister whom she’ll have to share a room with again. We learn of her biting remarks as well as her nasty persona, but she’s trying to change when she sees her former best friends are still as nasty as ever, and she realizes how it feels when she’s on the receiving end of the mean jokes. She’s especially trying to make amends with her sister and her former best friend, Gregory. But will it be too little too late?

The story has a nice flow and vivid descriptions. I loved the holiday preparations and how Darby’s attitude changed through her hard work, along with some of her relationships.

Dashing Through the Snow by Melissa Ferguson

I liked the premise of the story but some of it gave me a creepy feel—especially Ian, the elf. I liked that Willow was able to get on with her life and get a backbone after getting dumped by her boyfriend of seven years, and just when she thought he might propose.  Lucky for her, he didn’t!

Clarence and his grandson, Oliver, the current conductor of The Christmas Express, gave the story a magical feel. I loved all the thoughtful things they did, each in their own way and not looking for anything in return. Willow showed the type of person she was from the start and had a goodness about her. Even if she couldn’t always see it, others seemed to.  There were a lot of Christmas activities, and most were unexpected. I loved the closure and how lives can be redirected when you open yourself up to new adventures.

This was probably my favorite story, and I wish it had gone on a little longer since it ended too abruptly for me. Kacey comes home from Charlotte to the small town she grew up in to help her sister with her bakery while Dani’s husband is out of work. It helps that she can do her job remotely. Kacey never expected to run into her former best friend, Drew. She always hoped for more from their relationship, but when she went to the prom with his best friend and then started dating him, Drew could no longer even be friends. But now that their paths have crossed again and they’re both single, could there be more? If his life is enmeshed in their small town while hers is in the big city, will they be able to work it out?

There were an abundance of holiday traditions, and I loved Kacey’s relationship with her family, including her nieces, but also with Drew as they renewed their friendship. Drew was definitely on the quiet side even though he was a music teacher, but they balanced each other out. They just needed to learn to communicate better. She was very giving and wanted to make life easier for her family. The flow of the story was just right and the ending was filled with promise.

All in all, ON THE WAY TO CHRISTMAS: THREE STORIES, is a great read leading up to the holidays.