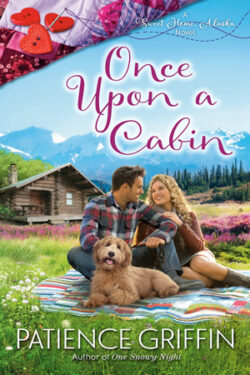 ONCE UPON A CABIN is the second book in the SWEET HOME, ALASKA series, and I can’t wait for more. It was fun being back in Sweet Home and reuniting with so many of the characters, being part of the community with the small businesses and their owners as well as the Sisterhood of the Quilt. The descriptions were vivid and had me feeling like I was there.

Tori and her sister McKenna are sent to Alaska to make something of themselves by their rich uncle, who has decided that they need more in their lives than what they currently do. He’s locked their trust funds, taken their credit cards, and their inheritance depends on them fulfilling the year-long requirements he sets forth for them in Alaska. They don’t expect to enjoy any of it, but they both are in for some huge surprises.

Tori has to learn to be a homesteader, and it won’t be easy since she’s considered frail. She has asthma and there’s a lot to trigger it. But when she meets mountain man Jesse, who is hired by her uncle to teach her the ropes, things get interesting. She finds him bossy; he wants to be sure she knows all that homesteading entails, especially since he has other commitments and won’t be around for the full year. McKenna is sent to Anchorage to work in a bank. She and her new boss, Luke, don’t seem to get along either but have a lot of interests in common. Watching the two sisters try to figure out how to exist in their new environments with the men who are training them was satisfying to watch. The attractions were there, but everyone seemed to be in denial. When one was on board, the other wasn’t.

There is a nice flow to the story and a lot of attention to detail, especially as they relate to Alaska. There are multiple stories being told that are woven together nicely. The story has a pleasant conclusion and ties up loose ends. There is more than one happily ever after, and all are nicely portrayed. At the back of the book there’s a preview of the next book in the series, and I can’t wait to read it.

This is only the second book I’ve read by Ms. Griffin. I look forward to reading many more of her books.