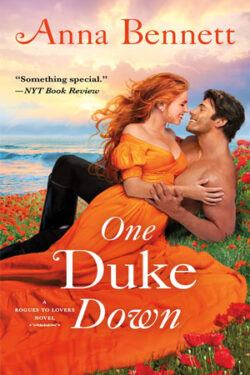 Andrew Keane, the Duke of Hawking, travels to an English seaside resort town to escape scandal. However, trouble follows him there. Keane wakes with an aching head and a fiery-haired woman hovering nearby. He plans to discover the identity of his attacker, but first, he needs his rescuer’s assistance. Keane cannot ignore his growing curiosity of the beautiful angler, especially her distrust of the nobility. Will Keane and Poppy figure out his assailant? Can he convince her to take a chance with him? Or will their differing social status stand in their way?

Miss Poppy Summers is a fisherman’s daughter. She takes over the family’s angler business, while caring for her ailing father. Poppy discovers an unconscious man washed up on the beach and tangled into her nets. She suspects the man will be nothing but trouble, especially when he claims to be a duke. Poppy reluctantly agrees to help Andrew Kean find his assailant. She soon becomes swept up in the adventure and the man. Can Poppy trust Keane with her heart? Will she dare fight the social barrier dividing them?  Or will Keane prove to be like the other members of the ton?

Keane is a delightful surprise! I could not help but fall in love with the charming rascal! Keane is a man who has survived his father’s belittling contempt, but he never allowed it to harden him. I adore Keane’s generous heart. He would willingly step in and help someone from the working class against his peers. What I love the most about Keane is that he is not conceited or pompous. He does not care about class distinction. Keane never once put on airs around Poppy or disparaged her way of life.

I am thrilled that Poppy received her happily-ever-after. She deserves it. Poppy has this scrappy personality that I cannot help but adore! She is not afraid to speak frankly or stand up for herself when necessary. I understand Poppy’s negative outlook on the nobility. She has weathered their disdain and superiority all her life; however, she knows there are a few exceptions. What I love the most about Poppy is her dedication to family. For all her brother’s flaws and faults, she has never given up on him or abandoned him. Plus, Poppy sacrificed her dreams for the future to care for her father.

ONE DUKE DOWN is the second book in Anna Bennett’s historical romance series, ROGUES TO LOVERS. The story can easily stand alone. However, I would highly recommend reading the prior book, GIRLS BEFORE EARLS. It introduces the prominent setting, a charming little seaside town called Bellehaven Bay. It also shows the sweet friendship between Poppy, Hazel, and Kitty, plus their secret sisterhood. I love how Kitty and Hazel play important roles in the story’s development.

ONE DUKE DOWN is a whimsical tale of two people managing to overcome their social standing to be together. I finished this book in two sittings because I really did not want to put it down. I wonder if Kitty is the next Belles to find her special someone. I cannot wait to find out!