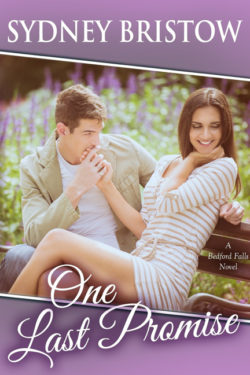 ONE LAST PROMISE is a nice continuation of the BEDFORD FALLS series. After getting to know Kelsey, Alex’s sister, and Damon, Alex’s best friend (ONE STEP AWAY) Kelsey and Damon are now front and center in this book. They didn’t disappoint!  There’s a smoldering attraction between them, but Alex wants nothing to do with it and keeps warning them away from a relationship.

Alex and Marisa are still in love, and it was heartwarming to see. Kelsey has opened her second themed restaurant and continues to run herself ragged since she doesn’t have a life outside of work. Damon is still writing romances, and Kelsey is intrigued enough to see what the hoopla is all about. We get to meet others in Kelsey’s family as well as friends and two-faced, wishy-washy, Paul. He definitely gave me the creeps more than once. His Jekyll-and-Hyde persona didn’t sit well with me. The more I got to know him, the more I disliked him. Actions do speak louder than words!

The relationships in ONE LAST PROMISE seemed real, whether between friends or family, and there were a lot of undercurrents throughout. Damon seemed to still be coming to grips with his childhood and his past, and he didn’t like finding out how others perceived him. Kelsey had her own demons with her mom, and she approached them in a child-like way instead of head-on, which didn’t seem to match her character. Paul kept adding twists and turns to the story. I liked how the others tried not to let him get away with anything once they found out what he was capable of.

The story is filled with secrets, strained relationships, and growth and forgiveness. The romance is real and uplifting. There’s a depth to the characters, and I enjoyed learning about them a little at a time. The happily-ever-after satisfied me but the ending had enough loose ends to bring us to the final book in the series, ONE MORE CHANCE. I can’t wait for more.

I’ve now read Bristow’s first and second books in this series. I look forward to reading more of her books in the contemporary romance genre.