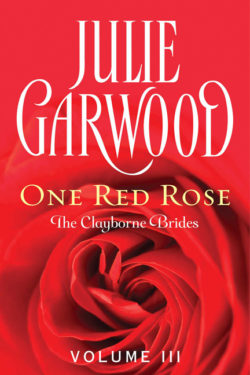 ONE RED ROSE is a great summer read that includes matchmaking high jinks, witty humor and unpredictable, scary situations and it is refreshingly quick in length.  Dishy, dashing Adam Clayborne gets the crap scared out of him. Late one night he arrives home and enters his dark bedroom and lays down on his bed, promptly squishing a lady. What the…? Adam finds out that Mama Rose invited Miss Genevieve Perry to stay and offered his bedroom since he wasn’t there. When Genevieve makes her declarations of marriage to Adam known, it shakes Adam down to his boots! After Adam and Genevieve share their intentions, it is clear that neither of them wants to marry the other. She is very pretty and all, but what in tarnation is really going on, Adam would like to know?</p

Adam, the oldest brother in the family, is a confirmed bachelor and never even entertained the idea of getting hitched. This is all Mama Rose’s idea. Coincidentally, Genevieve is on the run from an extremely deadly, furious man and his two henchmen. She travels to the Clayborne estate with the hopes of evading them. Genevieve is extremely smitten with Adam, especially after reading letters from Mama Rose, inviting her to come and stay with them sometime. Somehow, buoyant, beautiful Genevieve has gotten under Adam’s skin in a good way.

Abruptly, Genevieve takes flight to parts unknown late one night after receiving a wire. Adam races out to find her when she doesn’t show up the next day. Genevieve may have lied to Adam about her past and her main goal for coming to Bluebell, Montana, but he secretly wants to spend every minute with her. Oh, brother, he has it bad for Genevieve! What is a bachelor supposed to do?

Secrets, suspense and scary situations abound in Julie Garwood’s third novel in the CLAYBORNE BRIDE series called ONE RED ROSE. The oldest brother, Adam, is a loner and likes his life, as is. Only his Mama Rose has other intentions and sets him up with an unusually lovely, exquisite woman named Genevieve Perry. Only Genevieve has secrets and a past that have come to haunt her. Dangerous men are after her and Adam rushes to the rescue! One minute she is dazzling Adam with her beauty and the next she runs headlong into danger. Ms. Garwood keeps the plot quick, unpredictable and touching. This story sets up the next book in the series about the last brother named Cole. A common thread is woven in all three stories that include an evasive Marshal who helps them out when necessary. There are shootouts reminiscent of those in Clint Eastwood movies. I got a good laugh out of that! A very highly entertaining, frightening story filled with charm and humor. ONE RED ROSE is a fast-paced, matchmaking hit! Witty and wily!