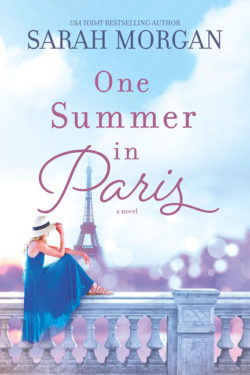 ONE SUMMER IN PARIS takes us from Connecticut to London and to Paris with Grace and Audrey at the core of the book. Chapters are told from each of their perspectives, alternating a chapter apiece.

Grace and Audrey’s lives are in turmoil. Grace, whose twenty-fifth anniversary falls on Valentine’s Day, has her romantic dinner plans go completely astray thanks to her husband. Grace is blindsided. Audrey lives in England but needs an escape once she finishes school since she has troubles learning. She can’t read and has problems at home too. They both end up in Paris and meet when Audrey comes to Grace’s rescue. From there it’s one adventure after another.

As Grace and Audrey open up to each other, their heartwarming relationship forms since Grace is the mother figure Audrey’s always wanted, and Audrey is the same age as Grace’s daughter. The vivid descriptions of setting and character pulled me under the story’s spell.

Both Audrey and Grace start to reinvent themselves and form a true bond. They let their guard down with each other and open their hearts to others. There are many stories going on at the same time, whether in Paris or elsewhere, but they all come together nicely.

The story has a nice flow, and the characters have depth. We go from the past to the present and back again several times. Although this is a stand-alone book, I’d love to catch up with the characters in a Christmas novella to see what happens to them next.  The cover fit the book nicely.

I plan to add many more of Sarah Morgan’s books to my always growing TBR pile.