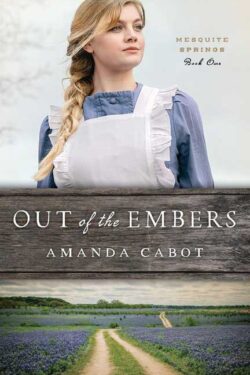 OUT OF THE EMBERS by Amanda Cabot is set in 1856. This is a story of hope, mystery, and new beginnings. It is the first in the new series Mesquite Springs.

As a child, Evelyn Radcliffe was orphaned when her parents were murdered in a fire at their restaurant. The orphanage where she grew up and is later employed is burned to the ground. Evelyn is convinced the same person who burned her parents’ restaurant is responsible. Only Evelyn and a little girl, Polly, survive.

Evelyn always feels as if the murderer is keeping tabs on her. I found this a bit hard to believe as there is never any concrete evidence someone is watching her.

Evelyn flees, changes her name and identity, and claims to be Polly’s sister. Caught in a thunderstorm near the town of Mesquite Springs, in the Texas Hill country, she and Polly hide under their wagon. Good Samaritan and talented horse rancher, Wyatt Clark, rescues them and takes them home for his mother and sister to take care of them. Eventually, Evelyn and Polly move to town and open a café.

Trouble soon follows Evelyn to Mesquite Springs. Wyatt is honor bound to keep her and Polly safe from the man who wants her dead. His plans don’t include a family of his own. Yet he finds that he is falling in love with both of them.

This was an intriguing story. There are two mysteries, suspense, and a sweet, slow, blossoming love story, all in a historically accurate book.

I’d recommend OUT OF THE EMBERS, to anyone who likes a good historical read.