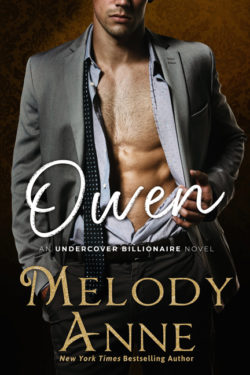 OWEN, the third book in the UNDERCOVER BILLIONAIRE series, did not disappoint.  We were not only reunited with Owen and his brothers and their families but there were threads from the first two books woven into this one.

This is Owen and Eden’s story, and there was a lot of heat and romance but also hurt, sadness, and fear. Owen and Eden were childhood sweethearts that dated for three years before Owen vanished without a word, only to return for good ten years later. The story had wildfires raging out of control with property and lives lost and a vendetta that took an ugly turn against both Owen and Eden. My emotions were engaged throughout.

There was a nice flow to the story but a lot more between-the-sheets moments than seemed necessary. The tragedies that befell both Eden and Owen were tremendous but somehow each one seemed to give them more strength to fight back and put an end to the craziness. Unfortunately, the story didn’t resolve itself cleanly, so I’m hoping that means the story will continue with another book in the series. The characters had a depth to them I enjoyed and it definitely enriched the plot.

The descriptions of the fire and its aftermath were vivid and drew me into the story. The pages turned quickly, as I wanted to see what would happen next. The love between the brothers and also between Owen and Eden felt real; they went from highs to lows and back again. Family was important to all of them. The criminal aspect of the many acts of arson and looking for the arsonists added a layer of suspense. I look forward to reading more in this series.