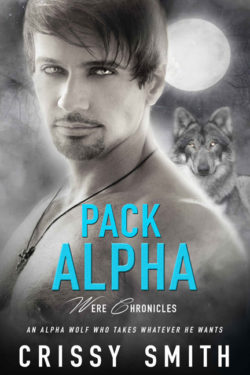 In Crissy Smith’s PACK ALPHA, the first in her Were Chronicles series, Marissa Boyd knows heartache. It’s almost all she has ever known. Her parents didn’t want her because of her status as a non-shifter. Her pack kicked her out when she was eighteen and forced her to live on her own. And her relationship with her sister is strained because of the past. She doesn’t need to be in a pack, but she still feels the loss of what a pack should be, so she covers her hurt with sarcasm and anger. When her sister invites her to the new pack that she’s joined for her mating ceremony, Marisa knows she cannot refuse. She never expected to be attracted to the arrogant Alpha who make her want things that she shouldn’t.

Gage Wolf is Alpha of his pack. He rules with an iron fist, but he is also fair and will protect his wolves with his life if needed. Already having been told of Marisa’s harsh attitude by her sister, he isn’t expecting much. What he didn’t expect was a beautiful woman who infuriates him one moment and sends his arousal skyrocketing the next. He knows there is more to Marisa than what she portrays, and he is determined to find out what that is. When they give in to attraction, past experiences rise up and cause Marisa to try to leave–something Gage will not allow.

When the truth of what happened to Marissa and her sister in the past comes to light, Gage understands there is more going on with their old pack than anyone knew, and none of it is good. Determined to have Marisa as his own and find out what is going on with her former pack is now his new mission. But the past is never forgotten, and it can rise-up when least expected and open old wounds or create new ones. Marisa’s ex from her last pack is back and now Alpha, and he wants Marisa back, whether she wants to go or not. Gage knows danger is coming, and he will stop at nothing to destroy what threatens his future.

This new version of PACK ALPHA is a re-release that has been revised and re-edited. I read the book when it was first released and fell in love with the characters. I’m happy to say my love for the story has been re-kindled. Gage is an Alpha, badass and growly when needed, and soft and tender when dealing with Marisa. Marisa is an amazing heroine in this story. Her pain at her status and what happened to her leaped from the pages, as did her confidence and ability to deal with the blows that would not stop coming. PACK ALPHA is a wonder story of healing from the past and opening oneself to the future.