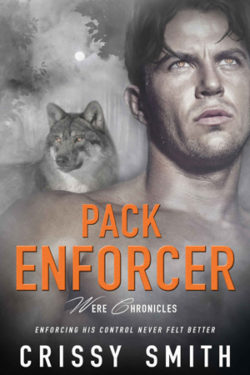 In Crissy Smith’s PACK ENFORCER, the second book in the Were Chronicles series, adventure and romance waits.

Being called home due to attacks on pack females outside of pack territory was not the way that Emily Black thought her day would go. Yet she is willing, even if begrudgingly, to go because it would ease the stress of her Alpha. What it is would not do is help her to deal with her attraction to the Pack Enforcer, Cain. Cain is the Alpha’s son and the one person Emily wants more than life and cannot have. Cain was the first to welcome her to the pack after she was freed from a cage she was kept in by a rogue. But now their relationship is strained because she threw herself at him and he didn’t feel the same way. Too bad he was the one that ended up having to pick her up to take her back to pack lands.

Cain wants Emily. He just doesn’t believe that he’s the type of person she needs. He’s a dominant wolf that needs to have control of what goes on around him, and Emily has been controlled enough in life. He’s willing to put her wants and needs ahead of his so she can follow where her future leads. If only he could forget one of the most memorable moments in his life that filled him with both lust and shame that he took advantage of a girl too young to understand what she was doing. Unfortunately, he still wants her, and when she smacks him upside the head with a truth he wasn’t willing to see, it might be time to re-evaluate his options.

But fate will not be denied, and the passion that burns between Emily and Cain is hot enough to scorch everyone around them. Cain finally decides that he will no longer step aside and make Emily his. Yet in the middle of their coming together, Cain gets sent to the site of another attack, one more brutal than the others before it. The attacks are escalating, and frustrations are growing.

Unfortunately, a misunderstanding sends these two lovers into a tailspin. Trust will take time, and that is the one thing that they do not have when another attack ends in death. Now the issue isn’t just protecting the females of the packs, it’s catching the one responsible for so much death and carnage before another life is taken.

This version of PACK ENFORCER is a re-release that has been revised and re-edited. PACK ENFORCER ensnared me in the story and made me want to bash Cain over the head! The chemistry between the characters was amazing, even when they were irritated with each other. Emily is wonderfully strong in her own way and not willing to give an inch when it matters. I think what really pulls me about the story is that while it is a story of love that has been around for years, it is also a story of compromise and not an alpha male taking over. I am definitely looking forward to more stories within the Were Chronicles series.