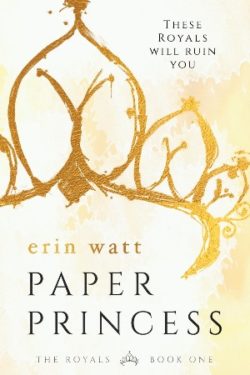 I admit I was quite skeptical when I heard about PAPER PRINCESS. I for one have never really been much of a fan of the Young Adult genre, but after numerous recommendations I decided to give it a chance, and I literally could not put this book down.

This gem contains a bit of something for everyone with a super steamy yet angst filled love story. Then there is a very sketchy mystery surrounding the deaths of two different people. All of this is folded into the drama of the lies/secrets that all the Royals have. You are left guessing throughout the entire book–and reader beware, it does end in a huge cliffhanger.

Ella Harper is barely surviving, sometimes eating just once a day. She uses her mother’s identification, which states she is thirty-four, allowing her to work as a stripper to pay the bills. Ella learned long ago to do what she had to do to pay the rent since her mom was so sick prior to her death of cancer two years ago. At seventeen, Ella has not had anything come easy for her, so when a man shows up at the strip club where she works and claims to be her guardian, she can’t get away from him fast enough. Seventeen is still considered a minor, so Ella will either be reported to the authorities or have to accept a deal with Callum Royal – her new guardian.

Ella has agreed to finish out her last two years of high school while living with the Royals. The only problem is someone forgot to ask the other members of the family how they would feel about that. And they are none too thrilled with their father’s newest idea. With all five of Callum’s sons ignoring her, or in Reed Royal’s case, acting outwardly aggressive towards her, she is not looking forward to the next two years.

I was shocked this was considered a YA book as it was super steamy and a rather mature read. This book was everything I wanted to read so far this summer, and it was quite enjoyable. All the characters, whether it was the heroine or the villain, were so interesting it kept you engaged to the very last page. The new dynamic author duo of Erin Watt has gained another loyal “Royal” fan.