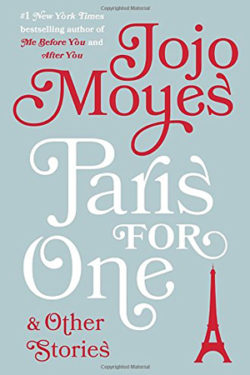 JoJo Moyes has always been on my radar, but somehow I’ve never read any of her books. I plan to rectify that in the future by adding some of them to my always growing TBR pile.

PARIS FOR ONE AND OTHER STORIES was not at all what I was expecting. I enjoyed the story, PARIS FOR ONE, but the other eight stories in the book were extremely short and couldn’t even be called novellas. They were over before they started, and there were always innuendos regarding the stories with little or no plot or character development. It was almost like I was dropped into a snippet of someone’s life.

PARIS FOR ONE has Nell front and center. She decides to have a getaway for a weekend in Paris with her boyfriend, but it doesn’t work out the way she’s expecting. Nell doesn’t like surprises, plans out everything, and everyone around her knows how she is. When she decides to make the best of her weekend that doesn’t go as planned and that she’s already paid for, she’s in for a few surprises, and all are good. I enjoyed seeing Nell decide to forge ahead in a foreign country and how her decisions opened up a whole new world for her. Her friendship with Fabien is heartwarming, and they each seem to be what the other needs as they come out of their shells and embrace life. The desk clerk at her hotel, Marianne, was fun to watch in her interactions with guests but especially with Nell.

The descriptions of Paris were vivid, and I loved the way Fabien helped show the city to her. They have chemistry and seem to get each other, which boosts both of their self esteem. When Nell gets a surprise from her friends from out of the blue, things do get a little awkward, but Nell rises to the occasion. There was nice closure and maybe a happily-ever-after, but I would have liked Moyes to delve deeper into this story instead of spinning out the other short stories in this book where they didn’t seem to belong.