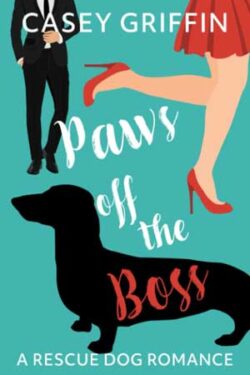 Aiden Caldwell is the CEO of a prestigious investment firm. He meets Piper when she interrupts a business meeting to deliver a singing telegram. Aiden never thought he would see her again, only to run across her at the rescue dog shelter. He cannot help but like the spunky and independent female. Dangerous mishaps happen around Piper, endangering her life and that of her canine charges. Can Aiden convince Piper to trust him? Or will a misunderstanding destroy their budding romance?

Piper Summers cannot seem to catch a break. She works three jobs to put herself through veterinary school. Piper even volunteers at the Dachshund Rescue center with her doxie partner, Colin. She just needs to hold on until she graduates. Piper encounters Aiden Caldwell during a disastrous singing telegram gig. She soon finds herself a victim of a stalker, who is determined to chase her from the center. However, Aiden proves to be her knight-in-Armani. Can Piper learn to rely on Aiden? Or will she crash-and-burn?

Aiden is such a love! He may have been born into a privileged life, but he never once acted like a snob. Aiden does not believe he can fix everything with money or his company’s influence. I like how he can be himself around Piper. She is the first person he has encountered who does not want something from him.  What I love the most about Aiden is how he taught Piper that it is all right to depend on others occasionally. That she does not have to deal with all her problems alone.

Piper is such a riot, especially her interaction with her partner-in-crime, Colin. She is a stubborn woman, one who hates asking others for help or assistance. Piper believes she must tackle the entire problem head on. I admire Piper’s drive and dedication. If it helps pay her tuition and bills, she will endure any unpleasant or degrading job. What I adore the most about Piper is her disinterest in Aiden’s money and influence. She may be down on her luck financially, but she refuses to rely on him for money.

PAWS OFF THE BOSS is the first book in Casey Griffin’s quirky, dachshund-oriented series, A RESCUE DOG ROMANCE. Its former title was MUST LOVE WEINERS. The author has received the right back to the series, and she decided to revamp the story. Of course, I had to read the changes. The story did not disappoint. It made me giggle and smile from start-to-finish. I am a dachshund mom, so it’s a delight to read a story with that particular dog breed.

PAWS OFF THE BOSS is a charming and hilarious tale of two people from different social standings learning to compromise to be together. I cannot wait to read the changes the author made in the next two books.