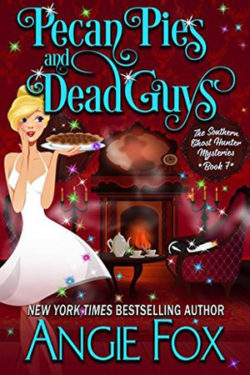 Verity Long and Frankie, her ghostly counterpart, agree to assist in solving a 1920 cold case. However, Verity has problems in the living realm to deal with also. Someone keeps leaving pecan pies on her doorstep. And Verity’s ex-fiancé drags her into his midlife crisis. Will Verity and Frankie’s unorthodox methods crack the cold case? Can they discover who the dominant ghost is in time?

Sheriff Ellis Wydell asks Verity for her ghostly insight on a murder case. On top of all that, he deals with his mother’s machinations and his younger brother’s midlife crisis. When someone tries to poison Verity, Ellis shoves his current case aside to protect her. Can Ellis solve both cases? Or will his family interfere?

Verity continues to grow with each new book. I admire the amount of verbal and psychological abuse Verity endures for Ellis. She has accepted the fact that Virginia will never welcome her or accept her relationship with Ellis. Regardless of the matriarch’s demeanor, Verity behaves civilly around the woman and stands her ground when necessity warrants. What I adore the most about Verity is her empathy towards the ghosts she interacts with. She treats them as if they were still alive. I believe that is why Verity is so good in her ghost investigations.

Ellis is such a wonderful guy and boyfriend. Not many men would be able to handle the repercussions of Verity’s ability; instead, he takes it all in stride. I like how Ellis tries to comprehend the nature of Frankie and Verity’s conversations from hearing only one side. It shows what a good sport he is. I love how he sometimes depends on Verity’s spectral outlook when a case proves difficult or goes against his instincts. What I like the most about Ellis is ability to take his mother to task for her unwelcome behavior around Verity. He knows Verity is trying to forge a cease fire with his hostile mother only to meet resistance.

PECAN PIES AND DEAD GUYS is book seven in Angie Fox’s amusing paranormal series, SOUTHERN GHOST HUNTER MYSTERIES. I like how this story picks up a month after book six, MURDER ON THE SUGARLAND EXPRESS. Enough time for Verity, Ellis, and Frankie to catch their breaths and relax before the next caper falls into their hands. To understand certain contexts mentioned throughout the novel, it is necessary to read the previous six books.

PECAN PIES AND DEAD GUYS is an uproarious good time. Angie Fox made the roaring 20’s leap right off the page with her colorful ghostly characters, the period slang, and vivid party descriptions. I wonder what other humorous shenanigans are in store for Verity, Frankie, and Ellis.