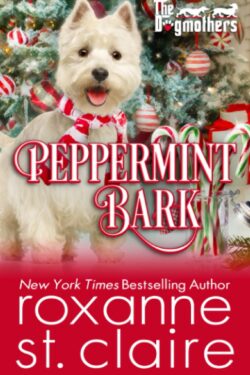 Colleen Kilcannon Mahoney is the Dogfather’s widowed sister. She co-owns a dog-treat store with her daughter. Colleen finds herself the latest victim of the Dogmothers’ matchmaking. However, the man they chose is the same boy who stood her up forty-five years ago. Colleen decides to assist Tim with his goodwill mission. Being with him again reawakens some of her teenage dreams. Can Colleen prove to her family that she is not averse to change? Or will she let doubt stand in the way of a second chance?

Timothy “Tim” McIntosh is the vice president of property development for a high-end hotel chain. He returns to Bitter Bark, North Carolina, to settle his late father’s affairs. Tim agrees to fulfill his father’s deathbed request. He needs to find three certain people and grant them their heart’s desire. Tim also wants to apologize to Colleen for skipping out on her on prom night. She helps him discover his own heart’s desire. Will Tim manage to finish his mission in time? And can he convince Colleen to see the world with him?

I am so glad that Colleen got a happily-ever-after. She definitely deserved one. I adore Colleen’s devotedness to her family. She would do anything for family, especially her sons and daughter, and she knows her family would do the same for her. What I like the most about Colleen is her willingness to help Tim with his mission. She did not hold a grudge against him, especially once he explained his reason for leaving. Colleen respects Tim for helping his late father make reparation to the people he wronged.

Tim is a sweetheart. I like that the first thing he wanted to do in Bitter Bark is to find Colleen and to apologize. Tim lived forty-five years with regret about standing her up that long ago night. What I adore the most about him is Tim’s willingness to complete his father’s deathbed request. He knew what kind of man his father was. The two may have parted on bad terms; however, Tim did not hold that against the man.

PEPPERMINT BARK is book nine in Roxanne St. Claire’s dog-themed, contemporary romance series, THE DOGMOTHER, a spinoff from her THE DOGFATHER series. The story can easily standalone, but I recommend reading the prior books and novellas, along with the previous series, to appreciate the three families’ dynamics. I am generally not a fan of the second-chance trope. However, I did not mind as much with this story since it is between a much older couple.

PEPPERMINT BARK is a sweet and wholesome tale focused on a second chance at a later-in-life romance. I am dying to know who is next on the Dogmothers’ matchmaking radar? Ella? Or Nick?