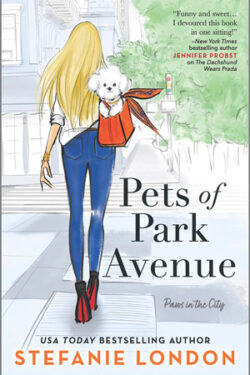 Scout Myers works at her friend’s talent agency dedicated strictly to animals. She wants to prove she is responsible enough to care for her sister. An unfortunate accident at work almost destroys Scout’s chance at a promotion. She needs to find a temporary doggy replacement and fast. However, the only replacement who resembles her client belongs to Scout’s estranged husband. Scout knows she needs to confront their unsettled past if she wants to succeed. Can she win guardianship of her teenage sister? Or will Scout’s insecurities set her up to fail.

Lane Halliday is a tech entrepreneur, who runs a successful multimillion-dollar company. He has dedicated his entire being to work. Lane receives a shock when his estranged wife knocks on his door, asking to borrow his dog Star. Scout’s return brings a slew of problems and bittersweet memories. Lane reluctantly agrees to her request but with restrictions. Being around Scout again reawakens his old feelings for her. Can Lane and Scout settle their differences for a possibility at a second chance? Or will he proceed with the divorce proceedings.

Scout is such a relatable heroine. She is a woman with self-confidence issues and insecurities. I admire Scout’s steadfast determination to better herself. She never had much positive influences growing up, except for her best friend Isla. Scout owns up to the many mistakes that she has made over the years. What I adore the most about Scout is her sense of selflessness. Her life may be a mess, but that does not stop her from helping people, especially strangers.

Lane has this hot nerd vibe. He is neither alpha or beta, which makes him such a nice change of pace. Lane is a man who likes to adhere to rules and responsibilities. I like how Lane never allowed money or success to go to his head. He remains humble, willingly helping those who are important to him. What I adore the most about Lane is how he openly accepts Scout. She may be his opposite, but he never once considered changing her. Lane likes how she balances his perfectionist nature.

PETS OF PARK AVENUE is the second book in Stefanie London’s dog-oriented contemporary series, PAWS IN THE CITY. This story can easily stand alone. There is no ongoing, intricate back plot. I do recommend reading the previous book to understand the bond Scout shares with her friend Isla. Isla, the heroine from THE DACHSHUND WEARS PRADA, plays a great supporting role throughout this book. It is disappointing that Theo and Camilla did not play a more vital part. They are merely mentioned. However, it is great to witness that continual happily-ever-after.

PETS OF PARK AVENUE is a sweet yet positive tale that proves it is never too late for second chances. I sincerely hope the author writes a story for August! She deserves a happily-ever-after. I cannot wait for the next installment.