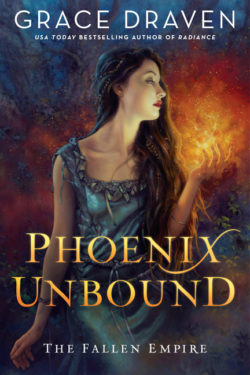 Azarion is known as the Gladius Prime, the best and undefeated gladiator in all the Empire. He sees through Gilene’s illusion spells and recognizes her true ability. Azarion senses her fire magic is his only hope in escaping the Empire and returning to his nomadic people. He promises to return Gilene back to her village once he obtains his rightful birthright as the Kestrel Clain’s chieftain. Azarion soon discovers a kindred spirit in Gilene. Can Azarion convince Gilene to stay with him and his people? Or will he raze the Empire to the ground to protect her?

Gilene is a fire witch; however, her fire magic comes at a cost. She sacrifices herself to the Empire’s annual Rites of Spring tithe to protect the women of her village. Gilene is coerced into helping the Gladius Prime to escape his enslavement. She glumly agrees to aid Azarion in taking back his birthright in hopes of being returned to her village. Gilene never imagined that she would grow to love the fearless yet reckless warrior. Will Gilene forsake her obligations to her village to remain with Azarion? Or is she doomed to burn once more?

I admire Azarion’s amazing patience to wait ten years for an opportunity to present itself to finally escape his captivity. He too has endured and survived all kinds of atrocities, especially the one that women generally face. I like how Azarion’s traumatic degradation helps him sympathize and understand women better. He may force Gilene’s hand to help him, but Azarion never once took liberties with her person. Instead, he protected and provided for her. What I adore the most about Azarion is his ability to see the real Gilene beneath her cynical façade. He acknowledged and admired her inner strength and unbreakable spirit.

I adore Gilene. She is not your usual run-of-the-mill heroine normally found in romance or fantasy genres. Gilene’s obligations have made her disillusioned and bitter; however, her personality subtly shifts among the nomadic Savatar tribes. I admire her indomitable spirit. No matter what hardships or atrocities she faces, Gilene refuses to let them break her. She endures and survives to the best of her ability. What I like the most about Gilene is how she discovers her true self among Azarion’s people. Away from her homeland’s twistedness, and her village’s expected obligation, she can finally think for herself and see certain things in a different perspective.

PHOENIX UNBOUND is book one in Grace Draven’s fantasy series, FALLEN EMPIRE. This book delighted me because it reads more like a fantasy novel than romance. Grace Draven is a new-to-me-author, one I plan to read more of in the future. I love how the author’s storytelling held me immersed, despite the story’s slow start. I like how the author did not muddy the plot or the story’s momentum with unnecessary, drawn-out sex scenes. The intimate scenes between Azarion and Gilene are more meaningful than hot and steamy. However, PHOENIX UNBOUND does touch briefly on dark and violent triggers, such as attempted rape, torture, and death.

PHOENIX UNBOUND is an awe inspiring tale of two tortured, kindred souls bonding together and shedding the shackles that bind them. I hope the author decides to write a story involving the enigmatic shade speaker. I cannot wait to read more in this rich and entrancing world Grace Draven built.