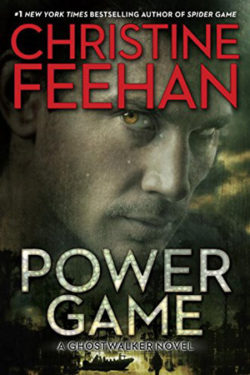 In Christine Feehan’s POWER GAME, the 13th novel in her Ghost Walker series, Feehan really hits her stride. This series shows no signs of growing stale. Completely the opposite, as each book in the Ghost Walker’s world introduces the reader to new groups of supersoldiers while keeping up with ongoing storylines. Feehan’s deftness with a clean, tight story is as befits a #1 New York Times bestseller for sure. An incredible read!

In POWER GAME, Captain Ezekiel Fortunes, a doctor and supersoldier, must deal with a genetically enhanced female, a spy named Bellisia Adams. Zeke is called to lead his rescue team, but things aren’t as they seem. Meanwhile, Bellisia goes rogue, escaping from her handlers at great cost to her health.

Zeke can command energy that affects his surroundings. Bellisia can go undetected and is a master assassin. The powers they possess weren’t overdone and nicely complemented the other.

The villains are recognizable to readers of the overarching storyline. Peter Whitney is still around, as is Violet Freeman. But it’s the heroine of this story who really shines. Feehan gives us a strong, capable woman who’s as likely to save her mate as she is to save herself. And in Zeke, we get a caring, formidable hero, one who has close ties to family as well as his supersoldier, Ghostwalker brothers.

I was surprised at the ending and loved how Feehan wrapped up one thread in the series. Readers not familiar with the Ghost Walkers will be able to follow the plot without issue, but the read is richer for those with background on the characters, especially Nonny, a wonderful matriarch who provides grounding for the warriors around her.