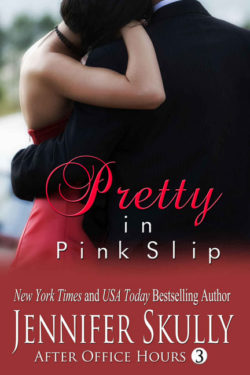 Book three, PRETTY IN PINK SLIP in the After Office Hours series by Jennifer Skully was a wonderful love story about an older man younger woman, boss and employee—all kinds of reason to keep them apart, but they can’t fight the attraction between them.

Single mom, Ivy Elliot loved looking at photos of her boss’ granddaughter.  Brett Baker, CEO, was way too handsome to be a grandfather. Ivy only saw him as a handsome, attractive man, but he was off limits because he was her boss.

When Ivy is fired by human resources for asking for a raise, Brett finds out and tells her she isn’t fired. He gives her a raise and a promotion.  When she tells her mother about the incident she advises her to sue the company and get every penny she can. But Ivy can’t do that to Brett especially after she sees him with her 6-year-old daughter Joy.  He’s wonderful with her.  He takes them to the zoo, then invites Ivy, Joy and Ivy’s mother to Tahoe for Thanksgiving weekend.

They become involved in Tahoe, and Ivy is falling for him, but in the back of her mind she can’t help but wonder if he only wants her so she won’t sue him.  Ivy is terrified of being hurt again after Joy’s father threw her out when he found out she was pregnant.  She’s been on her own ever since.

When they return after Thanksgiving, Ivy plays it safe and limits Brett’s contact with Joy, keeping their relationship strictly sexual. Brett is hurt and angry with her decision and tells her he isn’t interested in what she’s offering. I love that Brett refuses to settle and I felt Ivy’s fear that she’ll be rejected again. Ivy has to face her fears or  have an unfulfilled life.

A great read and so much fun to catch up on with Jordana and Gloria from book one and two. Loved it!