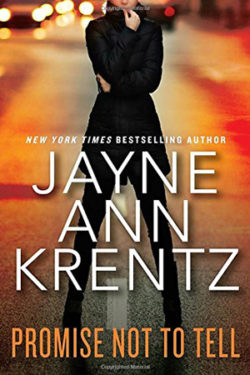 Jayne Ann Krentz continues to dazzle with the follow-up to ALL THE GIRLS HAVE GONE in PROMISE NOT TO TELL. A burgeoning romance develops during the course of an intriguing investigation into the death of a former cult member. Krentz is at the top of her game as she pits two child survivors, now adults, against a mastermind who’s eluded justice for far too long.

Virginia Troy, a gallery owner, was one of the children who escaped death in a horrendous fire while living in a cult. Cabot Sutter, another child who survived the same horror, is now a private investigator who’s never forgotten the man who nearly killed them all. Virginia seeks help investigating the suspicious death of one of her artists. Because that artist left behind a painting that asks more questions about the past than it answers.

Along with Cabot, Virginia will seek answers. The two grow closer, but so does the danger. And someone doesn’t like the questions Virginia is asking.

Another winner from Jayne Ann Krentz, though this one is more of a suspense than a true mystery (the bad guy is a given from the beginning). The suspense rides seamlessly alongside the romance, and the tension amps as the intrepid heroes try to figure out what’s really going on and what that painting really means. A must-read for JAK fans, and a thrill-ride for those seeking equal amounts of romance and intrigue.