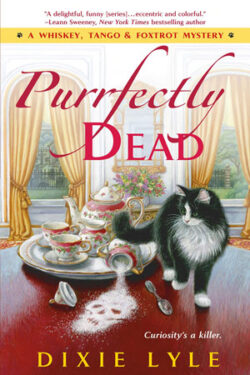 Foxtrot is a top notch assistant to multimillionaire, eccentric Zelda, known as ZZ. ZZ is hosting huge, lavish dinner parties on her immense estate every night. Although, one night a garish murder takes place and all mayhem breaks loose. The evening’s party includes a safe where a magician is locked inside. Although, once opened a different magician is found dead inside. The cops are called and Foxtrot, Tango and Whiskey band together to unscramble the mystic clues and the motive in time to prevent a disastrous, apocalyptic showdown between the scary Unktehila and the strong Thunderbirds. Foxtrot must unscramble hints and folklore from unlikely sources like the pet spirits in the pet graveyard she patrols. Will Foxtrot discover the deadly killer before it’s to late?

Cleverly written and very entertaining, PURRFECTLY DEAD is aglow with nuance, hidden messages and duplicity. Foxtrot, a first rate assistant to rich ZZ, responsibly handles guests, meltdowns, party affairs, and solving murders. She unscrambles the myriad of evidence from various mysterious sources with her supernatural furry buddies giving their own personal hilarious versions of help. Will Foxtrot solve this mysterious murder in time to thwart a potentially dangerous end of the world showdown between two supernatural forces? There was so much going on that you might need to make a list to keep the facts straight! Whew! If that isn’t enough to give you whiplash, then this lively, witty, comical, paranormal story is for you! I loved Ms. Lyle’s characters and their sarcastic personalities! PURRFECTLY DEAD is ferociously funny and masterfully mysterious!