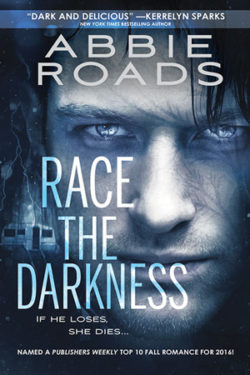 Abbie Roads’s RACE THE DARKNESS is the first in her Fatal Dreams series and a stunning debut. Dark romantic suspense mixed with the paranormal make for a book you can’t put down. It’s a fascinating read that explores the depths of the human will. Her villains are complex, her protagonists even more so,and the plot is a fast-moving product of characters that continue to evolve.

Xander Stone is a criminal investigative consultant for the police. Having been struck by lighting long ago, he’s been left with both physical and emotional scars. And he can hear a person’s thoughts. He has a terrible relationship with his father and family, and he doesn’t get along with those he’s agreed to help. All in all, to say he’s dysfunctional when it comes to relationships is putting it mildly.

When he hears a familiar voice in his mind pleading for his assistance, he’s all set to ignore it, as he’s been doing for some time. But lately something about the voice–about her–calls to him. When he finds Isleen Walker, a woman who’s been tortured for years, he’s horrified to know he’s been hearing a real woman, not a figment of his imagination.

Isleen is much more than a helpless female. Roads does an amazing job of portraying the heroine as both a victim and a strong survivor, so that her relationship with Xander never feels forced, but organic to the story and their characters’ growth. Isleen saves him as much as he saves her.

Watching Xander mature and accept himself and his ability to forgive made the story so much deeper. And seeing Isleen heal while dealing with so much pain only made the intimate scenes with Xander that much richer. A perfect pairing of hero and heroine, and the mythology Roads introduces into the story to explain their fit was more than intriguing.

RACE THE DARKNESS by Abbie Roads is an amazing read that you’ll want to stash on your keeper shelf so you can pull it out and read it again. I can’t wait to see what Roads does in the second of the series with HUNT THE DAWN, which releases December 6th, 2016. Just in time for an early Christmas present!