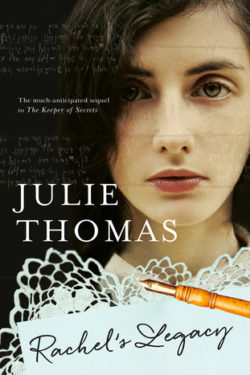 From the heart wrenching Holocaust to present day, RACHEL’S LEGACY is a historical novel about the tragedies in World War II Germany with many hidden secrets and marvelous discoveries. This is the second novel in the Horowitz family saga. This time around Dr. Kobi Voight, art historian, receives a bundle of letters from his mother who doesn’t know who wrote them. The letters are written in Hebrew, so Kobi has them translated. His mother lives in Australia. However, she moved there as a child with her German parents in the early forties. Kobi discovers the letters are a journal, accounting the life of a young Jewish woman named Ruby, who gave birth to a baby girl. What do the letters reveal?

Kobi learns the baby was given away to protect her from the Nazis. The writer, Ruby, works for the resistance, the people who undermined Hitler’s vision for Germany. What will Kobi find out as he travels to Berlin and the United States as he tracks down information about the letters? Is he part of the legacy as well?

RACHEL’S LEGACY is an amazing accounting of the atrocities on the Jews during World War II. Ms. Thomas expertly researched the Holocaust and all the parties involved in Hitler’s rise and fall. Sadly, many Jews did not survive the camps. Some were fortunate to have compassionate people hide them. Such as the tale of the mystery baby, who was given a chance to live. Dr. Kobi learns more that he ever imagined, as he delves into the past. The letters open up a can of worms, where one thing leads to another. What does he find out? Will it lead to his own ancestors? This story is definitely a tearjerker, so have Kleenex nearby. Ms. Thomas’ story is phenomenal! I highly recommend RACHEL’S LEGACY because it is absolutely stunning!