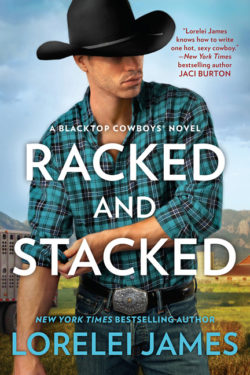 RACKED AND STACKED is the ninth book in the BLACKTOP COWBOYS series, and it took me a few minutes to sort all the characters out since I’ve only read one other book in the series.  RACKED AND STACKED was a steamy read with hot between the sheet moments and some with no sheets or beds needed.  There was a lot of cussing that didn’t always add to the storyline.  I get that truck driver Larissa, or Riss as she was called, was a tomboy growing up and is trying to make it in a man’s world.  She also doesn’t believe in dating or giving her heart to anyone.  But a quick hookup, no bed needed, is fine with her.  Ike isn’t much of the dating type either. He’s all man and between jobs, although no one seems to know it. When they are near each other they are like oil and water. When they are thrown together first at a wedding of friends as best man and maid of honor, they make a truce.  But what makes him volunteer to help her out when she gets seriously injured? Neither of them has a clue and then all bets are off.

They say the opposite of hate is love.  Can that be true in Riss and Ike’s case?  They both have secrets, and both have families that were thrown for a loop when they were younger.  There were a lot of twists and turns but a nice flow to the story with a lot of background information given.  There was also a lot of depth to these two characters.  I liked that as we got to know them, we also were given reasons why they act the way they do.  Watching their attraction and sexual attraction grow was interesting except for their one step forward and often two or three steps back approach.  I liked Riss’s alternate reality scenarios and how Ike learned to let her speak her mind and not jump in unless he was asked to contribute to the story.  Their families added another layer to the story and it wasn’t all good, but there was a realism to it.  There is ultimately a happily ever after and some closure, but an epilogue would have been nice and tied up some of the loose ends.

Ms. James is an author I’ve read a few times before but not as much as I’ve wanted to.  I do hope to read more of this series since I’ve only read this book and HILLBILLY ROCKSTAR, the sixth before in this series.  I’ve added a few of her books to my always growing TBR pile.