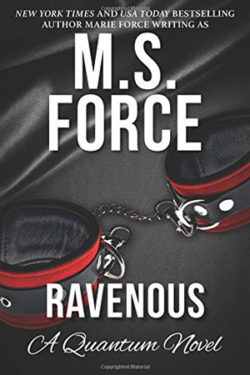 RAVENOUS is the fifth book in the Quantum series and centers around another one of the enigmatic owners of The Quantum Group–Jasper Autry–and the woman who captures his heart–Ellie Godfrey. What starts off as one friend doing a favor for the other turns into so much more when true motives are revealed.

Ellie Godfrey is almost thirty-six years old, and her biological clock is ticking rather noisily as of late. Without any decent male prospects on the horizon, Ellie researches in vitro fertilization (IVF) and assumes she will pick out a donor from a book of candidates. After having just made her mind up to go through with the IVF, she is explaining her reasoning to Jasper, a good friend of both her and her brother’s, when he does something she never saw coming.

Jasper Autry is one of the best cinematographers in the business, and he has the extreme fortune of calling the Godfreys his dearest friends. So when Ellie tells him her plan to use a sperm donor to create the child she so desperately wants, he volunteers to be the child’s father (genetically speaking) as long as he gets to make the baby the old-fashioned way. Jasper has always had a thing for Ellie, but out of respect for her brother and at risk of losing her friendship, he never acted on his feelings for her. Now he is given the perfect opportunity to show Ellie his true feelings, and he certainly doesn’t disappoint. There is an issue though, since Ellie is vanilla and Jasper is definitely…not. Will she be able to accept his kink? What else is he hiding from her?

I first fell in love with the Quantum series when movie star Flynn Godfrey met his match in VIRTUOUS. We are now five books in, and RAVENOUS is a friends-to-lovers masterpiece with exceptional characters that I adored. This is a must-read series that is five-alarm-fire hot! Whether you start with book five or book one, do yourself a favor and get to know the Quantum Group. They are well worth your time.