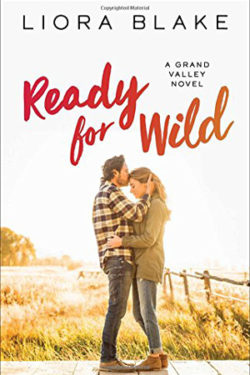 READY FOR WILD is a wonderful continuation of the GRAND VALLEY SERIES, and this is book three. We are reunited with characters we’ve met in the first two books, FIRST STEP FORWARD and SECOND CHANCE SEASON, and caught up with their lives, though they weren’t as involved in the story, except for Garrett, as I would have liked.

Braden and Amber seem to be total opposites. He doesn’t like that she stars in her own hunting show since he doesn’t like hunting shows. He’s also seen the comments her viewers make about her and doesn’t like them. He’s a game warden in Colorado and doesn’t have time for her and her team’s nonsense. But Amber’s team has to scout areas of where to film her next segment, since her show is losing ratings and this is her last chance to keep her show.

But hostility doesn’t stop Braden and Amber from having immediate chemistry when they meet. I love the nicknames–Jolly Green Giant for him and Mountain Sprite for her.  I also like that he thinks of her as a live wire. They tread lightly around each other since they’re trying to fight their attraction, but that only goes so far.

We get to know Braden and Amber as individuals as well as a potential couple, and their family stories are told. He’s from Oregon; she’s from Texas. And while some of their outlooks on life are the same, some are polar opposites. They seem to understand each other and know each other’s thoughts despite only having known each other a short while.

There were quite a few twists and turns to the story as well as vivid descriptions of the hunting, the lands and the animals. There is a depth to the characters and a happily ever after. There was some closure but not enough for me. I would love to see another book to the series or at least a holiday novella to tie up some loose ends and give me the closure I usually look for.

I’ve read Blake’s first three books in this series. I look forward to reading her TRUE SERIES and have added the books to my TBR pile.