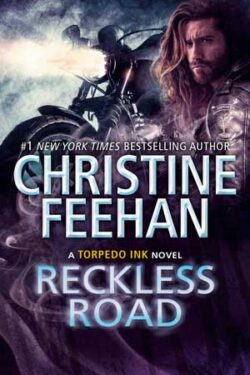 RECKLESS ROAD is a Torpedo Ink book. Though it stands alone, it is more enjoyably read with the rest of the series.

Like his brothers and sisters in the Torpedo Ink Motorcycle Club, Gedeon (aka Player) has special paranormal skills that make him a very dangerous man. He doesn’t play by society’s rules and will do whatever he needs to do to protect those he considers his family. However, using his talent extracts a physical toll on him.

Player barely makes it home after completing a mission and is now suffering the physical consequences of using his gifts. He’s helped to his room, where he collapses, trying to recover when he has the most amazing dream. A beautiful woman comes to him. She somehow takes away his pain and makes him feel things he has never felt before. If the woman was a dream, she was amazing. If she was real, she was probably hired by his brothers to take care of him, and he wants her to leave him alone.

Zyah is no dream. She felt Player’s pain and couldn’t help but try to help him. She’s hurt when he sends her away, not knowing he didn’t believe she was real. When she meets up with him again, she wants nothing to do with him even though he now realizes just how special she is and that he needs to be with her.

When someone attacks Zyah’s grandmother and tries to kill Zyah, Player puts his own life at risk trying to keep them both safe.

For those who like the Torpedo Ink book series, this story follows the suspense and intrigue like the previous books. There are recurring characters that are great to see again, and the love story between Player and Zyah is rocky, but you can’t help but cheer for them and hope they can defeat the evil around them.