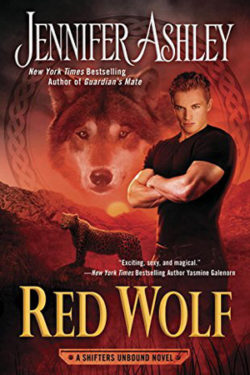 RED WOLF by Jennifer Ashley is the tenth book in her bestselling SHIFTERS UNBOUND series. This book stands alone while adding to the series. But new readers will not be lost if picking this up without reading the previous books. RED WOLF is a stellar read, and a terrific mix of plotting, character, and conflict. I didn’t want to put it down!

Dimitrii is a red wolf Shifter, second in his pack and strong. He has a stutter, which isn’t a problem for him or those who live with him. And especially not for leopard Shifter Jaycee. She and Dimitri have shared a mate claim for some time, but they’ve never made it official. Jaycee can reject the temporary “hold” he has on her at any time. But she’s reluctant to do so. She and Dimitri have grown up together in their pack, and she has great respect for him–as well as a desire for the male she tries to forget. A warrior in her own right, she’s no one’s plaything. But she can’t stop wanting to be his.

Jennifer Ashley did a terrific job of showing how her characters can be both strong yet vulnerable. Working together, Dimitri and Jaycee strive to uncover a plot targeted at Shifters, one involving drugs, collars, and the enemy Fae. In the process, they’ll have to find out what they mean to each other, and if it’s enough to save them both in the end.

A terrific addition to this already compelling series. My only complaint is that the author doesn’t have the next book already out!