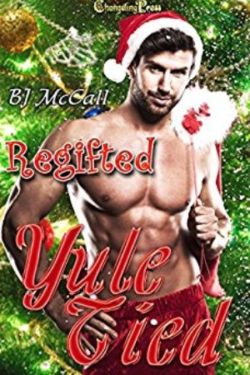 Fern’s Christmas gift from her boss is a perfume. She’s just happy to have received a gift until she sees a message inside the box cover ‘To Alison from you Secret Santa.’  She’s been REGIFTED.  Just the thought of it is depressing but the perfume smells so good Fern can’t bring herself to be too upset over it.

What she thought was merely an awesome scented perfume turns out to be pheromone laced and as it turns out it’s irresistible to werewolves – or one werewolf in particular, her neighbor Pace. Pace is in the city on pack business and while being away from his family during Christmastime could be a lonely event he finds himself captivated by Fern, and not just her scent either.   They initially each go to their separate apartments but when the power goes out they find themselves sharing a flashlight and so much more.   What will happen when the holidays are over and Fern’s perfume bottle runs dry?

B.J. McCall’s contribution to the YULE TIED line, REGIFTED is a fun, flirty, imaginative tale. Fern and Pace made me smile with their flirtatious introduction and sweet acceptance of their differences.  Fern seems to love Pace’s ability to transform into a wolf.  I adored their interactions and their willingness to share their love for nature with each other.   While it’s a short story, REGIFTED could easily be expounded on and I really think Alison could use her own story – after all, she accidentally regifted the perfume that led to Fern and Pace’s relationship, I think she could use a happily-ever-after of her own.