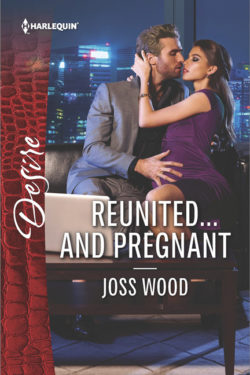 ​​​​​Passion is an understatement in Joss Wood’s REUNITED…AND PREGNANT. The two main characters, public relations expert Cady Collins and millionaire businessman Beckett Ballantyne, light up the pages with their heat, desire, and over-the-top hunger for each other. The magnetic prologue captured my attention immediately, and I ended up reading the book from cover to cover in less than a day.

After knowing each other for about a month, Cady and Beck decide to spend their summer break from college exploring Southeast Asia. They fall madly in love in a very short period of time, but Beck’s inability to trust and his fear of commitment abruptly ends their travels together. Now it is ten years later, and Cady is presenting her amazing rebranding campaign to the Ballantyne siblings. Cady has fallen on tough times. She is pregnant and needs the Ballantyne account in order to pay her rent and keep her once profitable small business afloat, otherwise she would never put herself in the position of seeing Beck again. Beck does not want to hire her, however, her ideas outshine the competition.

The spark from a decade ago is alive and well in both Cady and Beck. Denying their lust and feelings is quite difficult, since their work requires them to spend a lot of time with each other. Eventually they rekindle the longing that they once shared. In addition to Cady’s pregnancy, their emotional baggage is a major barrier for a possible future together. However, luck is definitely on their side for a second chance at happiness.

This book is nicely-written and the characters are well-defined. I formed an immediate connection with both Cady and Beck, in addition to the secondary characters. Their feelings for each other evolved very realistically and their time together was quite seductive. I liked how Cady was able to help Beck realize that he was not responsible for a major tragedy in his family’s life. This is the second book in THE BALLANTYNE BILLIONAIRES series and it can be enjoyed as a standalone. I am truly looking forward to the third book, which is due to be published in August of 2017.