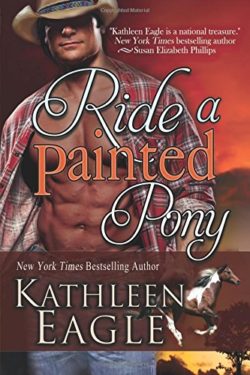 An unusual contemporary western with some suspense, RIDE A PAINTED PONY by Kathleen Eagle is so addictive I had to have book two right away.

We get a good picture of who the honorable and caring man, Lakota Sioux Nicholas Red Shield, is within the first few pages. Nick does everything within his power to avoid creating roadkill, including almost wrecking his like-new truck and empty horse trailer. He loves his truck and trailer – they’re the lifeline of his ranch and future. Not many men would risk wrecking their prized possession to save an animal.

While he’s trying to get unstuck from where he landed, Nick realizes he might have tried to miss a human instead of the presumed animal. By the looks of things, his truck connected with her body, so he feels responsible even though she swears Nick is innocent.

Lauren Davis, a tiny woman, lets Nick believe her name is Joey. It’s her baby’s name – the child who was taken from her. Badly beaten, dragged out of a car, and left at the side of the road to fend for herself, this new Joey can’t trust anyone. The man who has her baby plans to keep him and assumes she’s dead.

I was instantly hooked by this intriguing story and read it within two days in the middle of the holidays, which proves how addictive it was. The male point of view from two Native American cowboys explains my fixation. First, it’s very unusual to come across such a natural male point of view, let alone two of them in one book. Secondly, their Native American heritage makes this scenario completely unexpected and more intriguing. I loved that this book didn’t downplay the Native American hardships, which immediately mangled my heart.

Tough and an experienced jockey, Joey is also an uncommon heroine. She’s a mom who is unwillingly separated from her child. At first, I suspected that she was probably involved with some sort of mafia, which explains much of her unusual behavior. I was bothered by some of her actions, so she wasn’t my favorite heroine, but she is memorable and intriguing, as well as completely different from the norm.

Nick and his best friend Dillon are the stars of this book. I became so enthralled with them that I immediately ordered Dillon’s story, MYSTIC HORSEMAN, to review next. Both men are so realistic. I easily pictured them while reading, and I kept rooting for their success. I especially enjoyed Dillon’s insight on Nick, so I’m hoping Nick will return the favor in Dillon’s book. This is exactly the style of contemporary western I like to read. It’s modern, but still has the values and honorable ways I admire.

Nick is in an impossible situation. He commits to assist a woman who keeps secrets. He knows it’s a bad idea, as well as falling for her will be, but he can’t help himself. Joey isn’t an easy woman to understand. Will she run away before Nick gets a chance to prove his love for her?

In addition to the great characterizations, the ponies were also fascinating. I love horses, and just the idea of wild horses reignites my passion for these beautiful animals. The history offered in regards to their parentage was captivating. Nick buys a Paint, a favorite of mine, so I was glued to the story for all its attributes.

Author Kathleen Eagle has moved the contemporary western sub-genre of romance into an exciting new arena. Even though this book was published originally in 2006, this reissue feels like new territory that will enchant today’s reader. I’m thrilled to have discovered this duology and can’t wait to read the sequel, MYSTIC HORSEMAN.