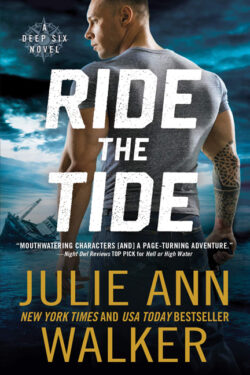 Former Seal Mason “Monet” McCarthy is one of six partners with Deep Six Salvage. He and his friends are taking a brief hiatus on searching for a particular sunken Spanish galleon. Mason intends to keep Alex Merriweather at arm’s length. However, the smart and infectious redhead has other plans. Mason’s past resurfaces, and it not only threatens his life but that of his friends, too. Will Mason be able to neutralize the threat against him and his teammates? Can he overcome his inner demons?

Alexandra “Alex” Merriweather is a historian.  She is hired by the Deep Six Salvage for her expertise in old Spanish scripts. Alex plans to use her findings for her doctoral dissertation. She relentlessly pursues Mason. However, the big and broody former Seal refuses her proposition. Alex finally gets her desire after they are attacked by a new enemy. Can Alex help Mason come to terms with his past? Will she be able to out-smart their enemies?

Mason is such a delicious wounded-hero type. His problem is more psychological than physical. I adore Mason’s pastime. It is just something one does not picture for a big and bad Navy Seal. I like Mason’s natural protectiveness towards his friends. There is little he would not do to keep those he cares about safe from harm. What I love the most about Mason is his respect and admiration of Alex’s intelligence. Most men would find her intellect unappealing, yet Mason finds it attractive.

Alex is a heroine who is not only smart, but she also wears glasses. She is such a firecracker! I adore Alex’s infectious personality. She can easily hold her own around six testosterone-laden former Seals. I like Alex’s willingness to do research. When something catches her interest, she is not afraid to study up on it. What I like the most about Alex is how she never let Mason’s gruffy nature dissuade her pursuit. She understood that it was a coping and protection mechanism.

RIDE THE TIDE is book three in Julie Anne Walker’s romantic suspense series, THE DEEP SIX. I am so psyched the author has returned to this series. It is one of my favorites. The story can stand alone; however, to understand the Deep Six guys’ bonds, and why they became salvagers, it is necessary to read the prior books and novella.

RIDE THE TIDE is a thrilling return to a suspenseful and action-packed series. I do hope Wolf and Chrissy are next. I cannot wait for the next installation.