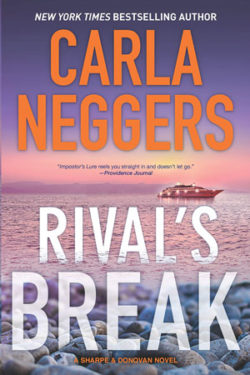 In Carla Neggers’ RIVAL’S BREAK, while attending his brother’s wedding, FBI agents Colin Donovan and his wife Emma Sharpe are asked by the local police to investigate what could be a very odd case of food poisoning.

Colin and Emma are perplexed as to what caused so many people attending a yacht party to suddenly became ill at the same time. Some of them critical enough to be taken to the hospital. What really catches their attention is when Colin recognizes one of the victims as an undercover British intelligence officer he worked with some time ago. It appears this man was attending the party under an alias. What is gong on?

Thus begins the mystery of Colin and Emma trying to determine if this was an accidental food poisoning or if someone was deliberately trying to kill one guest in particular. Add in a little art theft and you are off and running, trying to figure out the clues as to what actually happened, who is responsible, and will they get caught.

RIVAL’S BREAK was a fun read that takes you back and forth from Maine to Ireland, trying to figure out if there was a crime actually committed, and if so, how it needs to be solved.