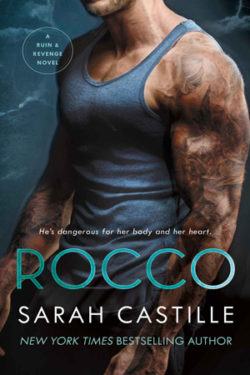 ROCCO: A MAFIA ROMANCE is book 3 in the Ruin & Revenge series, and it is as exciting as the first two books (NICO and LUCA). Sara Castille takes you into the dark world of the mob that leaves you on edge.

Rocco was raised by a monster. His adopted father, Cesare, has raised him to be the enforcer of the De Lucchi crew and do whatever it takes to protect the Gamboli family without thought or remorse. He has grown into a man whose name alone instills fear into those unlucky enough to have crossed his family. Rocco has always done what was expected because to do otherwise would result in pain and torture from Cesare, something he has endured all of his life. Rocco knows what he is expected to do until Grace Mantini comes back into his life. She is the woman he has tried not to think about for years….the woman he has told nobody about. Keeping secret about his feelings for her is the only way he can keep her safe.

Grace Mantini has been running from the mob for a long time. When she finds out her father and brother work for the mob, she wants nothing to do with them and the mob lifestyle. When her path unexpectedly crosses with Rocco, the man she knew and cared for long ago, the man who broke her heart, her life takes an unexpected turn. She realizes she now needs to re-evaluate everything. Grace still has feelings for Rocco, but he works for the mob. She doesn’t know if she can come to terms with the life he leads without losing herself.

ROCCO is an intense story that you won’t be able to put down. At times it is brutal. However, there is also a wonderful love story in this world, and you can’t help but hope that Rocco and Grace can overcome the obstacles they face and come out with their hearts intact. This book can be read as a stand-alone, but I recommend reading the other stories in the series because the characters appear in all three books, and that background only adds to the enjoyment of the read.  A great book!