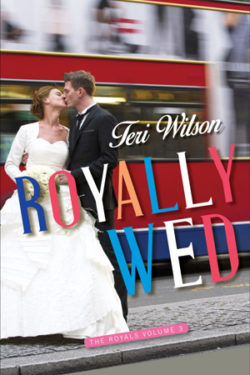 So charming and dashing, Princess Amelia wistfully thinks after a chance encounter with the classical musician, Asher Reed, who will play at her wedding. What is she doing thinking of him like that? In ROYALLY WED, the third novel in the Royals series, Princess Amelia is to wed the Duke of Atterbury but her heart is not in it. Oh bother! What will her mother, queen of England, think? Especially since Amelia’s track record for scandals is widely known, should she say something?

Asher Reed is an extremely handsome classical musician and is hired at the last minute to replace a famous cellist who falls ill. Learning he is to perform for the beautiful princess at her wedding, will he be able to put his nervous jitters behind him and get his career rolling again? Fate intervenes and Asher finds himself personally ensconced at the Royal Palace. Just great! With such close proximity to the princess, they meet amid dog interventions. Asher is inexplicably drawn to pretty Amelia and she foolishly falls for him. Not good! Will Amelia still wed the Duke when her feelings lay elsewhere?

When Asher inadvertently discovers the Duke has a secret, hmm…maybe fate is telling him to spill the beans and hope for the best.

ROYALLY WED is about a musician and a princess, a fiery attraction, and life altering decisions. Ms. Wilson’s story is like silk, goes down smoothly and is delightfully swoon-inducing. There are interesting characters, touches of humor, predicaments galore and a promising romance. When Princess Amelia meets cello player, Asher Reed, her heart melts. Life isn’t always easy and she is conflicted about her upcoming nuptials. Should she still marry the Duke? The author mixes great fun, trouble and a rich romance that will surely delight the most hardcore romance fans. Lots of cute dogs romp freely through the palace and plague poor Asher, which is absolutely hilarious! I was won over by the whole lot of them! ROYALLY WED is fast-paced, a story about the power of love and exquisitely crafted. A total gem!