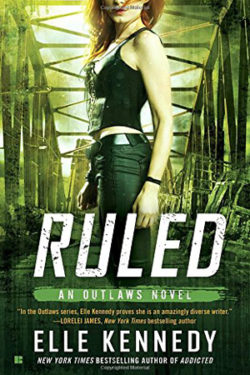 Having read and enjoyed most of Kennedy’s KILLER INSTINCT SERIES, I looked forward to reading her OUTLAW SERIES, of which RULED is book three. Unfortunately, the book read like one sex scene after another, which didn’t seem to add to the story line or give the characters more than a physical connection. I thought the first book in the series, CLAIMED, also had too much sex. But RULED ratchets it up even more with menage a trois and m/m interaction.

We are reunited with Connor, Hudson, Connor’s brother Dominik (who’s an Enforcer), Reese, and the other Outlaws in this dystopian story. This is Reese’s story, along with Sloan and Rylan and others that live in Foxworth. When there’s action and adventure, I enjoyed the story. Watching Reese as the leader or queen of her group but also the leader the others looked up to or looked toward for direction was refreshing.  Having a woman in charge doesn’t happen too often.  When all the groups had to band together to fight off the Enforcers and the government it kept me on my toes. As soon as sex was the focus I lost interest. I understand this was an erotic romance, but I felt so much physical interaction didn’t fit except to show the sex as a stress release. Seeing watchdog Sloan caressing Rylan was a turn off and didn’t fit my image of any of them. Unfortunately, Reese who was their leader as well as their sex partner, couldn’t think straight when she was involved with Rylan and Sloan and when she wasn’t with them, she was missing them. Her lack of focus, which wasn’t very commanding, was detrimental to many, including herself, and could have been the end of their unit, and almost was!

The story had a lot of family and friends, secrets and danger. Though emotions filled the pages, I felt like the sex took away from the emotional intensity in the book rather than adding to it. The steamy, burn-up-the-sheet moments were plenty, and though we did get a happily ever after and nice closure (that was unexpected) I still felt something was lacking.

I will give other books by Kennedy a try but don’t plan to read book two in this series, ADDICTED, since enough information was given in RULED for me to fill in the blanks I needed.