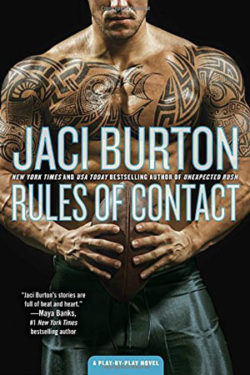 In Jaci Burton’s RULES OF CONTACT, Amelia Lawrence is a five star chef. She has worked hard to achieve this status and is thrilled to be the head chef at the exciting new trendy restaurant Ninety-Two. This restaurant is owned by football star Flynn Cassidy, defensive end for the San Francisco Sabers. Amelia loves that Flynn is a total foodie, loving both eating and creating dishes that are served in his restaurant. He also lets her use her creative juices to explore and develop unusual dishes they can serve.

Flynn Cassidy loves both football and family. With his love of cooking, owning Ninety-Two has become a dream come true, but his life is still incomplete. He is looking for the woman who will fulfill him, but all he encounters are women who want to use his fame to put them into the spotlight. He wants to be loved for who he is and not what he owns or earns.

Amelia has watch women come and go from Flynn’s life. She has seen how he has been used and feels so badly he is not seen for the amazing man he is. An after-hours social encounter puts them in a situation where they see each other as more than business associates. The attraction is strong, but it is also frightening. Her former husband became so obsessive he wanted to control all aspects of her life–from who she was friends with to who she worked for. She will not give anybody that type of control over her again. Flynn is also her boss, and she doesn’t want to jeopardize her career if things don’t work out between them.

Flynn is afraid of being used. He really enjoys his time with Amelia, and she seems to fit in with his family really well but… Yes, there is a but. He is afraid to trust that she really cares about him and is not using him to get ahead. The bottom line–can these two realize that loving each other doesn’t mean giving up their own goals and ambitions? Can they learn to trust and support each other?

RULES OF CONTACT is another book in the Play-By-Play book series. The love story of Amelia and Flynn doesn’t disappoint, and it is so nice to reconnect with characters from the previous books in this series, included in this one. There is a lot of hot lovin’ and great humor, especially especially between the Cassidy siblings. They remind me of my own family growing up. This is a great stand-alone read, but if you get a chance to read the other books in this series, you won’t be disappointed.